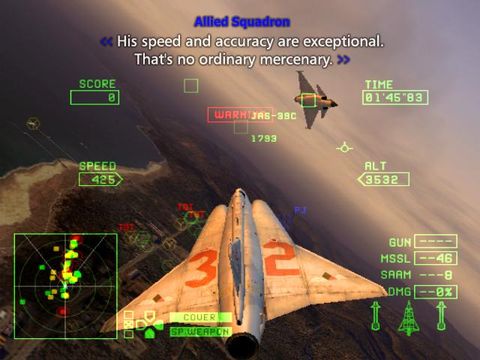 Ever been inside a banking F-14, trying to outmaneuver a set of incoming missiles while simultaneously keeping a bogie ahead of you in your sights? Yeah, we thought not. Well, we haven't either, but after piloting authentic jets, executing precise aerobatic attack patterns and generally blowing the hell out of everything, we can safely say this is pretty damn close to the real thing.

Ace Combat Zero: The Belkan War is the sixth game in a well-respected series that's always delivered the perfect blend of flight-sim detail and slightly sci-fi storytelling. On one mission you're cutting a path through the clear sky, shooting down traditional bombers and enemy planes, when suddenly a bus-sized laser splits the horizon and incinerates your buddies. You've just met Excalibur, the Belkan's monolithic tower of doom. Then there's an impossibly sized super-jet that practically blocks out the sun, bearing down on your allied base.

If all this sounds a little familiar, then you've probably been an Ace fan for a while. Each game unfolds the same way, plays out with the same mission types and resolves with the same bittersweet ending. The mission goals are mostly "blow up everything," with an occasional "don't let the Belkans destroy your friends." Even though you're supposed to be fighting back this vicious Belkan army, it seems to be on the run more than anything else.

But even though you're flying the same types of sorties as previous games, it's done so damn well that we can't complain. And thanks to some seriously increased AI, The Belkan War is easily the most intense game in the series.