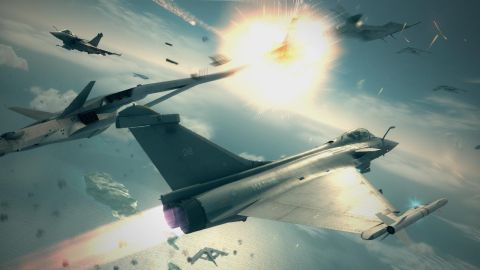 Six years ago Ace Combat 04 dropped everyone's jaw with its photorealistic airplanes, fast arcade action and ultra-detailed environments. It was a piece of technological grace that both showed what the current generation of consoles was capable of and also provided the most white-knuckle jet experience in memory. Now we have a new champion of the skies, and it's Ace Combat 6: Fires of Liberation.

Take everything we just mentioned - the planes, the intensity and the terrain - and nuke it all with a gamma bomb. The irradiated behemoth that emerges is Ace Combat supercharged in every conceivable way, from literally stunning graphics to dizzying battles that have to be seen to be believed. Gone are the sparsely populated skies of the PS2 games - these battlefields are completely jammed with anti-aircraft fire, enemy pilots, surface-to-air missiles, aircraft carriers, dozens of friendly units and about a billion smoky missile trails splitting the sky.

These enormous fronts are divided into multiple "operations," and you're free to tackle them in any order you see fit. However, your actions will affect the rest of the mission, so if you save an airstrip, for example, you can use it to re-supply the plane. Lose it and you'll have to make do with what you have. Complete enough operations and you're able to call in heavy-duty air strikes from your armada of trigger-happy friends. It's an absolutely gut-punching adventure from beginning to end, and if you fancy yourself a gamer or a graphics whore, you need to give this a shot.

Oh, there's still more praise to heap. It's just hard to put into words the feeling of screaming across a cityscape, the sun just starting to slink beneath the horizon as you send six specially-targeted missiles into a cluster of incoming jets. From one mission to the next you're constantly bombarded with tasks to perform and bogies to bag, from simple fighters to a gargantuan, flying superfortress that would make Nick Fury blush. The game's final battle is particularly exciting, but we won't spoil the details.

Now here's the sticky part - as breathtakingly paced as the game is, it's indecipherable to anyone who's never plunked a few good hours into the Ace games. All this data, from enemy positions to altitude to ammo to radar to individual operation status, looks like a mess of green text. To seasoned vets, it's a bunch of info that ranges from crucial to "get that off the screen." It's not the game's fault that piloting a 30-million-dollar death machine is complicated, and the dead-on controls make success easy for those in the know, but everyone else will need to spend some serious time acclimating themselves to the world of ace fighter pilots.