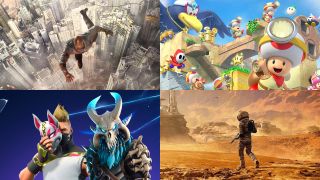 1. Fortnite season 5 is here with its most dramatic map changes yet - but is now a good time for beginners to dive in?

After teases and leaks we finally have Fortnite season 5 live on whatever format you’re playing on. And so many things have changed. Obviously the Fortnite map is the main one - there are new areas like Paradise Palms and Lazy Links, as well as a new desert location. And there’s tons of new things to find like giant viking ships, Easter island heads, even Durrr Burger is back. But it doesn’t stop there: the rifts are still around, teleporting you into the sky to glide back down again. Fortnite newcomers will find this a good (ish) time to give Epic's phenomenon a try, should you not be one of its current 145 million players - but expect to be confused and die a lot until you get comfortable with building and traversing open space. Seasoned players will be more concerned that there's an All Terrain Kart that can carry your squad around and double up as a bounce pad if you jump on the roof, and new ‘toys’ to play with which are like slightly fancier emotes. Then there’s all the rest like new skins, challenges, back bling and more. There’s a lot to unpack. Leon Hurley

What: Fortnite season 5
Where: PS4, Xbox One, PC, Nintendo Switch
When: Now

2. Sacha Baron Cohen is back doing what he does best in Who is America?, the “most dangerous show in the history of television”

What does a Sacha Baron Cohen (of Ali G and Borat fame) comedy look like in the Trump era? The Cambridge educated actor and comic has traditionally lampooned the ugly face of political extremism simply by lifting a mirror to its worst offenders, but we now live in a world where fact and farce are no longer mutually exclusive, making a send-up of society’s dark sides harder to stomach. After years prodding the institutional wasps’ nest on the big screen, Baron Cohen is back on television with Who is America?, a mysterious new show that apparently features controversial Republican politician Dick Cheney happily signing a waterboard kit without any sense of self-irony whatsoever. If every scene is as shocking and powerful as that one, this really could be a much needed comeback for the creator of *shudders*... Grimsby, at a time when the world is sorely in need of satire as sharp as Chaplin himself. It'll be worth tuning in live on Monday, since this is almost certain to break into your social backchat, for better or for ill. Alex Avard

Far Cry 5 was about as subtle as a sledgehammer to the nether regions, and its latest DLC, Lost on Mars is following that tradition. The standalone adventure puts you in the well-worn workboots of your former gun for hire, Nick Rye, as he's transported to the red planet with his buddy Hurk. There aren't any helicopters or trucks up there in space, apart from the ones that Elon Musk might have flung up there to show off to his mates, so you'll need to acquaint yourself with the new Space Jets if you want to get around. This being a Far Cry game, there's also a bunch of crazy guns to play with, including the Blaster of Disaster, the Hellfire and the Morphinator. It'll even add some new toys to the main game for when you're back from Mars - including the Obliteratorrrr, Taser Phazer Annihilazer, Nerve Reaper, and Grape Popper - and new assets for the Far Cry Arcade. It all sounds like tremendous fun with a quasi-plausible link to Far Cry 5 - but, to quoth 80s pop bard Paul Young, wherever Ubisoft's open-world lays its hat, that's its home. Rachel Weber

4. Celebrate 25 years of Hocus Pocus with a mini Halloween movie marathon - to discover a forgotten family classic that still holds its own

If you thought classic Halloween movie Hocus Pocus was released, well… during Halloween, then prepare for a shock. Despite the obvious All Hallows’ Eve theme of the 1993 film, it actually hit cinemas in July in the US before coming to the UK for a more appropriate October release. That means that this coming Monday is the 25th anniversary of Hocus Pocus and what better way to celebrate the cult classic than with an equally oddly timed mini Halloween movie marathon? (We all wish Halloween was more than once a year anyway!) Shut the blinds, block out the sun, and pretend it’s the time of ghouls and goblins and other things beginning with g, and sit back and rewatch Bette Midler do her thing in Hocus Pocus (“I put a spell on you!”). Then why not watch some other Halloween-themed movies like Trick 'r' Treat and, err… Halloween, while stuffing yourself with candy? Horror movies and chocolate? What more of a reason do you need? Lauren O’Callaghan

What: Hocus Pocus 25th anniversary
When: July 16
Where: Everywhere

5. Watch The Rock survive another disaster with pure charm and BDE - but his ex-FBI hero is a little OTT

The Rock has already faced earthquakes, international criminals and a magical video game, now he's taking on terrorists in the tallest building in the world. Playing an ex-FBI agent (one who must have hit the gym hard since quitting) Will Sawyer, he has to save his family from the burning and titular Skyscraper after a terror attack. The director is Rawson Marshall Thurber, who also made and wrote DodgeBall: A True Underdog Story, so expect a few witty one liners as Mr Rock is dodging bullets and riding the elevators. The Rock has been on a roll, but Skyscraper's mixed critical reception suggests Dwayne Johnson can't always hit the high notes. Rachel Weber

What: Skyscraper
Where: Movie theaters
When: July 12 in the UK, and July 13 in the US

6. Adorable puzzling ahoy as Captain Toad Treasure Tracker comes to Switch - a precious Wii U gem that was worth polishing up

Adorable Ninty mascot? Check. Lovely Switch feature implementation? Check. Puzzles with a gently sloping difficulty curve? Check. Basically, Captain Toad Treasure Tracker has got it all and it's finally coming to Switch. Originally a Wii U exclusive, the little puzzle was highly praised for its interactive puzzle boxes. Each level is basically a delightful little diorama that you can rotate, pull, push and interact with to collect gems, solve puzzles and navigate Captain Toad through. The level design here is absolute genius, where one little platform might stump you for a while, but when that voila moment happens, it's sheer joy. And just wait until you see the four brand new levels based on Super Mario Odyssey. Being able to waddle through little box-shaped version of Odyssey's Sand, Metro, Cascade and Luncheon Kingdoms is a little treat, and are just as beautifully executed as the other levels available. This is an absolute must-not miss Switch port. Sam Loveridge

What: Captain Toad Treasure Tracker
Where: Nintendo Switch
When: Out now

If you’ve been waiting for the right moment to go 4K, or to grab that new PS4 headset to give you the edge in Fortnite… well, Amazon Prime Day 2018 starts on Monday July 16, and it’s bringing the big bargains on all kinds of games, TVs, and gaming tech. We already know from Amazon that there will be up to 30% off Sony, LG and Toshiba TVs - most of which are likely to be 4K ready - and that there will be up to 30% off Sennheiser, Sony, and Bose headphones. We don’t know details of the gaming deals just yet, but previous years have seen heavy discounts on console bundles. Elsewhere, it’s often the best time to pick up a new PS4 external hard drive, and you can bet your ass (don’t bet your ass, you need it) some of the best gaming laptops will see heavy reductions too. If you want to keep track of all the Amazon Prime Day 2018 game deals, bookmark that link, and keep your eyes on this site during Monday and Tuesday next week. Andy Hartup

8. Octopath Traveller is basically eight stories for the price of one – but has split critics into one of two camps

Usually you only have one story to play through in video games. Not the case with Octopath Traveler, which is out this week on Nintendo Switch. Instead of the typical single hero you have eight characters to choose from, ranging from a hunter that can tame wild beasts to a deadly dancer intent on revenge. Each one comes with their own tale, so if you're getting Octopath Traveler you're basically getting eight games in one. Kind of. The JRPG comes with gorgeous visuals that the devs affectionately call HD-2D, and is sure to tug at your nostalgia heartstrings if you're a lover of Fire Emblem. Guaranteeing hours of play with that many heroes up for grabs, Octopath Traveler could be your next Switch addiction. Good luck with choosing your first hero: you're positively spoilt for choice. Zoe Delahunty-Light

What: Octopath Traveler
Where: Nintendo Switch
When: Out now