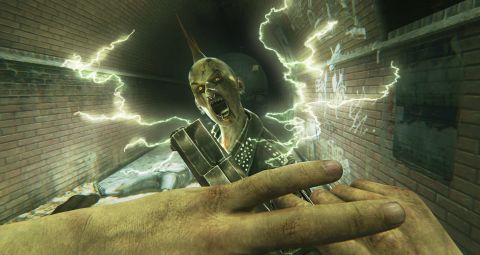 Zombi is hardly a deluxe version of ZombiU, with numerous bugs and few graphical improvements. It's still a good survival game, but feels outdated and misses the Wii U Game Pad.

In a world of weapon-wielding, ever-mutating, parkouring undead, the reanimated corpses in Zombi lurching after you for a big, grisly hug will bring a nostalgic tear to your eye, even as they sweep you up into their arms and take a big chunk out of your face. ‘They don’t make zombies like that anymore’, you’ll whisper, blowing your nose while your character snuffs it. You then awaken as a new survivor bereft of supplies and set off in search of your previous avatar - now a shambling cadaver with a pack full of choice gear on its back - to charitably cave its head in with a cricket bat. It’s the humane thing to do.

In case you blinked and missed it, Zombi was a Wii U launch title back in 2012. Dropping you in the midst of a London crawling with Infected, survival depends on your wits and the help of the voyeuristic Prepper. He keeps tabs on you via a network of CCTV cameras dotted around the streets, and sends you out on near suicidal missions around the city, all while bending your ear about deadly prophecies and the ruling lizard class over your comms.

Any urge for a reckless killing spree is quelled by the relentless nature of the undead and your tolerance for getting pawed at. A few swipes is all it take to chip off great big hunks of health, while a single bite is lethal. If you do succumb to the clutches of the throng of ghouls, you’ll spawn in the safe house as a new survivor, equipped with a bare bones inventory. In the vein of the Souls series, you get one chance to get back to where you croaked it and collect your goodies. But rather than daintily waving your hand around above a modest blood stain, Zombi will have you bludgeon your old-self into a sticky pulp before you can reclaim your possessions. If you want more of a teetering-on-the-brink-of-soiling-yourself experience, you can play in the permadeath mode where the high risk/reward really ups the ante.

The port comes with a few tweaks to the gameplay. As well as the stalwart cricket bat that was a staple of the Wii U game, a shovel and a nailed baseball bat expand the choice of melee options. Perks include a longer range, the ability to clobber multiple foes at a time, and increased damage - although the apathy developed from beating a wailing Infected's brains in a dozen times until it finally stays down isn’t much improved upon with the new additions that take equally as long to do the job. The charm of a gruesome beating is somewhat tarnished when each encounter is reduced to the dreariest of drubbings imaginable.

London is a novel setting for an apocalypse, and comes complete with zombies ranging from tracksuited hoodlums and sad-looking businesswomen, to swish Beefeaters and the Queen’s card. Throw in some crumpets and a pot of tea and it’s a veritable portrait of everyday life in Blighty.

What’s more, the cricket bat stubbornly refuses to leave your inventory, wallowing about and taking up a precious slot that could be better populated with a molotov, flare, or medpack once you upgrade to a stronger weapon. Both the shovel and spiked bat boast of their superior status in their item descriptions, but you’ll most likely stow them reluctantly away in the safehouse to free up space in your pack, rather than drag two melee weapons around. The same goes for the first pistol you pick up. You can’t get rid of the bloody thing even after you find a silenced alternative, although this was the case in the Wii U version too, and it was a nonsensical stipulation even then. An opportunity to improve the mechanics has inexplicably resulted in doubling down on the more dubious ones.

Disappointingly, the frame rate is still mired in 30fps and it very much looks like a straight port from the Wii U, with seemingly nothing in the way of a visual spit and polish for its debut on present gen consoles. I also came across my fair share of bugs. Some of them are fairly innocuous, like a zombie catching alight in a strategically planned trap, and then pottering around like a portable bonfire rather than crumpling into a crispy heap - nothing a sound thumping couldn’t resolve. Others are more grating, like pieces of loot whose locations were identified by the in-game scanner, but were apparently inhabiting a parallel plane of existence, because there was nothing there. The biggest annoyance is missing dialogue (and accompanying subtitles), and documents that can’t be interacted with, so you miss out on chunks of the story - which just so happens to be relayed through dialogue and documents that need to be interacted with.

The controls are slightly less sluggish than they are on the Wii U, although the simple act of sprinting is a bit hit-and-miss. In a game where a swift retreat is often called for, you can imagine how infuriating that becomes. This is largely due to the fact that you have to hold L3 rather than toggle it to run. You’ll need the upper body strength of a Gorilla and thumbs the size of bratwursts if you expect to be able to maintain a brisk jog.

The theme of dodgy controls continues throughout. Whether I’ve stumbled across more bugs or it’s a deliberate and questionable design choice as a means to create tension is anyone’s guess due to the sporadic nature of some of them. The in-game radar is a prime example; designed to highlight zombies on your HUD within a certain range, it mysteriously fails to work at intervals. Zombies hidden mere inches away fail to flag up on the radar, springing out on you as you walk through a doorway. The lack of a crouch button, on the other hand, serves only to infuriate. Crawl spaces and holes in walls result in context sensitive knees that only fold to allow you to crouch as you pass through. Considering that avoiding combat is often encouraged, not having the ability to crouch or sneak at will feels too limiting. Whether or not these difficulties are part of the deliberate design is irrelevant when they fail to bring anything to the table in terms of creating an uneasy atmosphere, and instead leave you feeling frustrated.

Meanwhile, the absence of a dedicated peripheral with the transition from the Wii U leaves a palpable void. An innovative approach to mirror the in-game device on the Wii U gamepad has morphed into a clumsy system of inventory management that is more bothersome, rather than serving to enhance the atmosphere. Inventory items can’t be rearranged, and it’s practically impossible to get eyes on your survivor while you’re rummaging through your backpack. And while the HUD fades away for a more involved experience, the minimap has to be displayed constantly, what with no second screen for it to live on.

Ultimately, this was a wasted opportunity to polish and refine a solid Wii U title that brought a fresh perspective to the genre on release, but is showing its age now. It looks and feels like a last-gen game shoehorned onto new platforms in a lazy port. It’s a poor survival horror game when the erratic control scheme is the most terrifying thing about it.

Zombi is hardly a deluxe version of ZombiU, with numerous bugs and few graphical improvements. It's still a good survival game, but feels outdated and misses the Wii U Game Pad.

Shabana Arif
Shabana was born looking like a girl wearing a Pikachu hoodie, so when such things became popular, she fitted right in. She writes guides, reviews and features for GR+ when she isn't screaming at Dark Souls 2 on YouTube.
See comments
Gaming deals, prizes and latest news