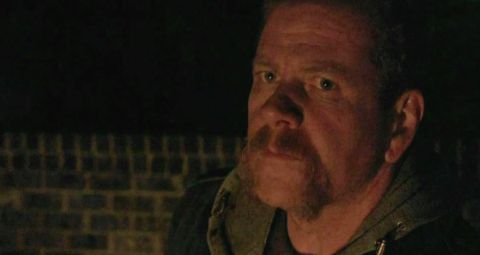 The second half of season five has played with the idea that the gang – specifically Rick and Carol – have become so inured to violence that they may finally go too far. The Alexandria Safe Zone, with its parties and quests for pasta makers, is so alien to what they are used to, it looked increasingly like they would ruin it by staging a bloody coup. “Conquer” found a way around this that was contrived, but satisfying nonetheless.

Deanna has organised a trial to determine whether or not to exile Rick into the wilderness (you get the distinct impression that she has already made up her mind on this one), but he changes the game by striding up, a walker strapped to his back, and setting out some new rules. He's not going to upend her leadership – at least not yet – but he is going to teach the Zoners how to live and survive in the new world. He's finally going to be the sheriff that he was hired to be. It's a smart decision. As exciting as it is when Rick goes dark, it's already been done plenty. Time for something new.

Admittedly, the set-up for all this was a little too convenient. First Gabriel left the gates open (so, er, no other guards then?), letting some walkers in. Then, just after Rick had made his big speech, Pete rocked up and killed Reg with a sword. That's the moment that Deanna breaks down and begs Rick to shoot him. It's surprisingly clunky by the standards of this show.

Still, the episode subverted expectations elsewhere, with the clearly cracked Carol restraining herself. We expected it from Glenn – even after Nicholas had shot him – but when she offers Pete some food, you fully expect it to be poisoned. Instead, she relies on a simple, but scary, threat. Our guys are dangerous. They've seen terrible things and have been dragged through hell. But “Conquer” suggests that they still haven't broken. Unlike their enemies, they can be reasoned with. They still have hope and humanity.

Elsewhere, we finally got some solid information about the Wolves – and they're exactly as nasty as we'd suspected. They sweep through settlements, killing and stealing before moving on again. We'll be seeing a lot more of these guys next year and while their scenes here are brief, they do establish them as a credible threat, despite the arse-kicking they receive at the hands of Morgan.

Ah yes, Middle-aged Mutant Ninja Morgan (hey, it sort of works) has finally returned for more than a cameo. The Walking Dead has played a seriously long game with Lennie James, but his return is an instant crowd-pleaser – so much so that you fear for his safety. The episode opened with his tense encounter with two of the Wolves and, for a few horrible minutes, I was certain they were going to kill him. Wouldn't that be just typical?

Instead, he whipped out a fighting stick and took his opponents down. It was kinda funny and a little naff, but in a good way. Morgan appears to have developed some kind of warrior monk vibe and found a way to survive “out there” without having his morality compromised – a direct contrast to most of our survivors.

So, a strong finale to a mostly strong season. It's pleasing to see characters like Sasha and even Gabriel develop, and the reconciliation between Abraham and Eugene was a sweet moment – something this show needs more of. I'm not sure that there was a standout episode to match the likes of "Clear" or "The Grove", but the introduction of the Safe Zone has had a tremendous rejuvenating effect. It's given us a new cast of characters, some new baddies and, for Rick, something to fight for. Now it's time to Fear The Walking Dead...

Lennie James was trained by Steven Ho for his stick fighting sequence. Does that name sound familiar? That's probably because he did Donatello's stunt work in Teenage Mutant Ninja Turtles II: The Secret Of The Ooze and played Chan in Mortal Kombat.

“Conquer” brought in some 15.8 million viewers in the US – a record number for a Walking Dead season finale. At this rate, Robert Kirkman's claims that the show could run for 12 years or more are looking very plausible indeed...

Hey You, What's That Sound?

The track playing towards the end of the episode is “Love & Mercy” by Gazelle Twin – the pseudonym of Brighton-based producer Elizabeth Bernholz. It sounded pretty nice, even obscured by all those walker noises. On a side note, composer Bear McCreary did some excellent work this week – particularly in the scene with Sasha in the walker pit.

“There is a vast ocean of shit that you people don't know shit about. Rick knows every grain of said shit. And then some.” Nobody does sweary repetition quite like Action Abe.

The Walking Dead airs on AMC in the US on Sundays and Fox in the UK on Mondays.