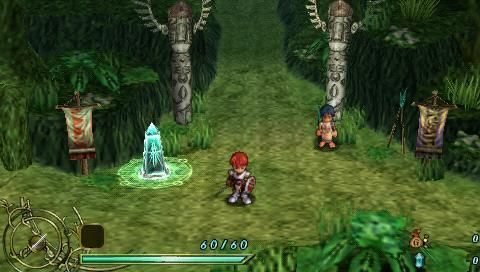 If you don't know how to pronounce the generations-old series of Ys, you've probably never even heard of it. It's a run-of-the-mill hack-and-slasher that has you battling monsters, chatting with long-eared villagers and searching ancient ruins for more powerful weapons. You're not getting an award-winning story or particularly deep gameplay, but fans of the old-school will feel right at home.

At least they would have on the year-old PlayStation 2 version. Ark of Napishtim on the PSP is a sorry excuse for a UMD, which is a travesty to say because the game is perfectly fine. But imagine 15-second loading screens for every room you walk into - and there are a lot of rooms strewn about the various mountains, forests and caves you'll be exploring.

The end result is that, for every hour you play, you could easily spend half that time waiting. We'retotally serious about that.Even selecting healing items in a sub-menu requires a few seconds of disc-whirring.

The PSP is supposed to be a fairly powerful piece of hardware, but you wouldn't know it from playing this game. The 1996-level graphics are in a constant state of muddy, choppy flux. Stranger still is the fact that the PS2 version had no such trouble, nor did it take time to load every little thing you do. We'd say this was a rush job, but it's been a year.

If you can somehow overlook all that, there's still some semblance of a quality adventure. The main character may never speak, and you only get three weapons the entire game, but in a strange, throwback kind of way Ark of Napishtim is a guilty, charming pleasure.

You begin washed up on a picturesque beach. Once some cute little elf-people nurse you back to health, it's time to fight your way off the island and figure out why no one can escape the area's surrounding, swirling vortex of clouds. And by figure out, we mean run, stab and blast lightning at stuff. But be ready to try, try, try again. Ys has never been easy, and you'll have to spend entire chunks of gaming just leveling up. The monsters really can tear you up that fast.