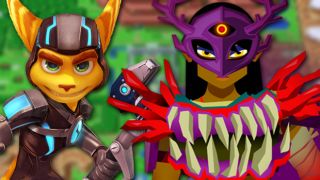 We usually take in-game maps for for granted, but their design can make or break our motivation to seek out every last object that the world has to offer. And frankly, I've reached a point in my gaming life where generously marked-up maps are the only way I'm even going to consider striving for 100% completion. Severed is the most recent game to get its secret-charting map oh-so right, with its unmistakable signposts (in the form of green question marks) denoting the location of every hidden collectible. And presenting these small mysteries with such a brilliant combination of clarity and discovery, where I'm told where to find them but not how to solve them, is what makes them feel like a worthwhile pursuit rather than time-wasting busywork.

Severed is a particularly special case in how much information it willingly shares via the map screen (and its always-in-view minimap cousin). As you explore the bizarre otherworld where our hero Sasha finds herself trapped, the map clearly displays the presence of secret passageways long before you have the means to open them. And as you progress, you unlock special abilities, which double as keys when used on walls with a matching symbol - symbols that the map plainly displays where most games expect you to make a mental note to come back later. In a game like Severed, where extensive backtracking is required to collect every last upgrade, this willingness to take a mental load off the player's mind is a godsend.

The map isn't selective about what it divulges, either; everything from the presence of a health-restoring fruit in a given room, to any sliced-off monster limbs you accidentally left behind (thus depriving yourself of key ingredients for crafting upgrades) is unmistakably marked for you. Severed's map is never trying to trick you or withhold information, in contrast to, say, Super Metroid's map which hints at some hidden items while leaving others completely obscured. All the clues are there, plain as day, and you never have to worry that you're fumbling in the dark regarding where you should go next. And crucially, solutions are never repeated, so each secret promises to a unique bit of brain-teasing.

From my experience, vague location hints can sap the life out of an otherwise enchanting game world. When Ratchet & Clank teases me with a number of Gold Bolts hidden somewhere on a planet and leaves it at that, I inevitably waste my time leaping into every nook and cranny with a thorough, exhaustive diligence akin to a QA tester, until finally I find my treasures and immediately stop caring about poking around my environment. What should feel like an organic reason to focus on exploration for a change ends up turning into tedium, a task that leaves me feeling more relieved than accomplished by the time I'm finally finished.

Or consider Hyper Light Drifter (a stellar action adventure that's out now on PC and coming soon to consoles). When you first step foot into its varied vistas, they convey a profound sense of serene beauty mixed with a subtle feeling of ruination and the remnants of a catastrophic conflict. Within these enchanting regions, you might stumble upon some ingenious secrets hidden in plain sight, which undoubtedly heightened my appreciation for the level designs. But once I decided that I would endeavor to find every last secret - even though the relatively abstract map is of little to no help - the mystique of each stage started to fade and give way to feelings of inept frustration. Every dead end felt like a small failure, and every successful find only meant that it would be even more difficult to locate whatever stone I had left unturned to discover the remaining secrets that still eluded me. It reached the point where the only reasonable way to make progress was consulting a FAQ - but once I had done that, the whole undertaking suddenly felt pointless.

And yet, despite the fact that each secret's location is clearly labeled without any effort on my part, Severed's green question marks or stylized eye emblems still retain an air of intrigue, enough to get me to come back for each and every one. It's not a question of where I ought to be looking, but what I might find when I get there, and that exciting prospect alone is all the reason I need to get moving. At no time do I ever have to disengage from the game to seek out counsel online; each question mark becomes an invitation to decipher a small puzzle, one which I know will be confined to a set parameter rather than a conundrum that lets me stray towards possibly unrelated areas. When I've finally uncovered the hidden collectible - likely a piece of a health- or mana-boosting demon organ, which I look forward to feasting upon - the question mark is stricken from the map, and I am reassured that my task is complete and I can move on to the next without wondering if I'm somehow missing something of crucial importance.

That's really what Severed's map delivers, besides clear guidance: peace of mind. When I did finally locate every last object and scored that Platinum Trophy, I felt accomplished, and the lack of frustration made it all the more worthwhile. These secrets weren't hard to find, and they weren't made to be - but they're presented in a way that makes them feel valuable nonetheless. In my mind, the best games are about understanding your objectives and achieving them through some degree of satisfying effort - and a map's design can help you determine not only the path you'll take, but if you even deem it worth taking at all.