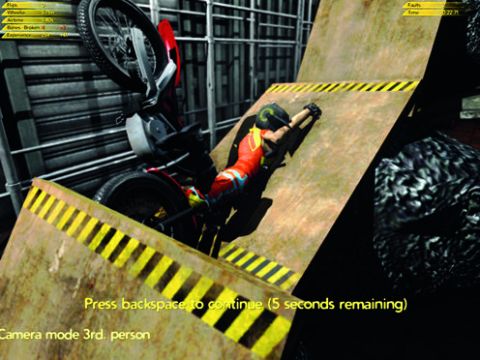 Developers seem to have hit on a new trend: any game with a ragdoll to torture will keep people coming back. We’ve had Sumotori Dreams, where a jittery figure pounds on another, Flatout 2 where you send your character through the windscreen of a crashing car, and now we have Trials 2, where the fun comes from whacking a trail-bike rider until he falls to the ground and spasms in pain. It’s a Junior Kickstart-style trail-bike sim, where you manoeuvre your little biker and bike around improbable tracks, mostly failing in spectacular, teeth-grindingly painful ways. There are just four controls: to speed the bike and slow it down, and to shift your balance between the front and back - plus a Trackmania-style reset system so that you can hop back to the last checkpoint instantly when things go wrong.

Which is, of course, the point. Failure is an option, here. Aside from the occasional moment where everything comes together and you soar like a teen prodigy into the air, this is a game where you’ll aim for failure over success, simply because it’s so damn fun.

When you succeed, the level grinds to a halt, the leaderboard pops up and you click past it to the next level; when you fail there’s a grim splatter of particles and hilarious limb-flailing. There’s the face plant, where your front wheel misses the target or loses purchase and your rider’s face stops the precious bike from going any further. There’s the 360° face plant, much the same, but it comes after a failed attempt at being awesome and spinning in the air, bum over head. There’s the face whack, where timing and some twisted level design encourages you to go as fast as possible head first into an overhanging ledge. And there’s the reverse of all these moves, which involve the back of the head splitting open like an unlucky Olympic high-diver. There’s even a bail-out button that ejects the rider, so you can deliberately break as many bones as possible (which, by the way, the game counts for you).

It certainly plays to its strengths. As with Trackmania, there’s a worldwide scoreboard full of amazing run-throughs mocking your meagre attempts. You can view any of these and play against them, and they download in the blink of a hummingbird’s eye. The best runs approach a Zen-like understanding of the track that would make the level designer weep. There are also achievements and groups to join, all done with an easy inclusiveness that drags you into the online community before you realise you’re there. Hell, we accidentally whacked Tab and an IRC channel popped up.

Perhaps there are too few levels, and maybe, just maybe, the game’s a bit too demanding for people with high blood pressure, but it hits a niche spot-on and manages to shine as it does. Being developed from aFlash gamehasn’t hindered it at all; the core of the original remains, but with some spectacular polish and care on top. This might be a new route for people out there with a game idea in mind: get it out there into the browsers to make sure it’s what we want. The previous exposure hasn’t done Trials 2 any harm at all; it made us hungry for more.