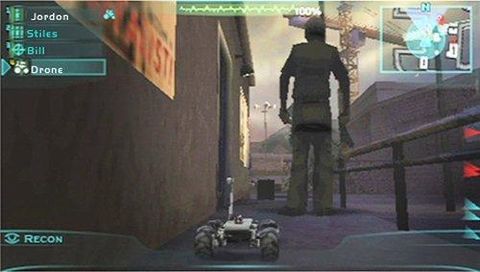 Before you get your hopes up, you should know that this is not a tactical shooter based on the motion picture classic Predator. If it were, it might have been more enjoyable, and it’s really a shame that Ubisoft hasn’t done some sort of licensing magic to make that happen.

Instead, Ghost Recon Predator is a traditional, third-person Ghost Recon game, only it’s for the PSP and has a lot of problems. It’s not all bad, but there are certainly enough issues to mean that anybody who’s not a hardcore Tom Clancy game fan might want to keep their distance.

You control a group of three Ghosts that you can switch back and forth from at will, each of whom you choose from out of a pool of eight soldiers before each mission starts. Ghosts come in four different classes, with different weapon types and specialties for each. In completing missions with each Ghost, they earn experience points and level up, increasing their stats. As such, you will more than likely stick with the same group of three soldiers throughout the game, unless you really want to try out another class combination.

The story is largely unimportant and is never really compelling. This isn’t helped by the snippets of voice acting that are typically sub-par at best. All you might remember by the end is that you spent a lot of time in Sri Lanka, some guys died and some stuff blew up. You are never given reason to care about your teammates, the situation, or the citizens the game sometimes asks you to save.

As this is a shooter trying to work on a PSP, you might expect this to be another reason to curse the lack of a second analog stick on the system. You would be right in thinking that. The game tasks the analog nub to both movement and aiming, with the option to switch in and out of “free aim” mode with a tap of the X button. While in free aim mode, you can still move and strafe if you hold down the L shoulder button, which is better than nothing, but the entire process feels clunky.

It feels even clunkier when you’re trying to utilize cover. You get into and out of cover by tapping the square button, which in and of itself is perfectly fine. But to pop out of cover to shoot enemies, you have to hit X to go into free aim, and while in free aim you don’t have a particularly huge range in which to shoot. So if an enemy chooses that moment to walk up beside you and start shooting, the process of trying to remember which buttons to hit in order to get out of cover, turn around, get back into free aim and then shoot is far more complicated than it should be, and might result in a lot of frustration.

This might not be so bad if your teammates were able to watch your back, but the truth is that the AI in the game is absolutely terrible. Your allies will spend most of their time running into objects, trying to shoot through walls or doing absolutely nothing while either they or you get shot to hell. And if you decide to control them yourself, you may find that they have inexplicitly wandered away from the battle, or are turned in completely the wrong direction. You can play with a couple of human buddies if you want to try to solve this problem, but you have to play locally, and you all need copies of the game.

Enemy AI is sometimes smart, though. Brilliant, in fact. On occasion, an enemy will decide to simply stop fighting and cower behind cover, never popping out again. This a genius move, particularly because you cannot continue many sections until every enemy is dead, forcing you to hoof it all the way to the offending soldier and shoot him from close range. Sometimes, this is a long walk.

You do have some ability to order your teammates to either attack a specific enemy or go to a certain location, but they’re not usually good at following orders. Even if they were, the game isn’t actually designed in such a way that you really need smart tactics, at least on the normal difficulty setting. You can easily run and gun your way to victory without ever needing to open your tactical map.

Ignoring these and other problems, the game still isn’t very captivating. When you’re not shooting enemies, you spend most of your time planting C4 on things and watching the rather lackluster explosion. Then you rinse and repeat for about six hours until the game is over. Along the way, you’ll see some truly awful character animations that look like they’re moving at about three frames per second, particularly when the character is far away.

All that horrible stuff said, there were some moments when we had legitimate fun with Predator, and it makes us feel like the idea of a portable Ghost Recon may not be all bad. But Ubisoft will have to put some serious effort into the controls and mechanics if they want this franchise to have a bright future on handhelds. As it is, Ghost Recon Predator has a lot of ambition but not nearly enough polish.