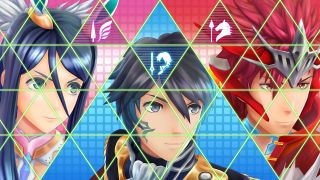 I still remember when I first found out about Tokyo Mirage Session FE on the Wii U back in 2017. At the time, I had recently finished Fire Emblem: Fates and Persona 4: Golden, and I was keen to find games of a similar ilk. Knowing this, a friend recommended Tokyo Mirage Sessions to me by saying "it's like Fire Emblem and Persona fused together and gave birth to a world filled with idols." How could I resist after hearing that?

In many ways, my friend's description was pretty much spot on. Tokyo Mirage Session FE Encore is another chance at life for this wonderfully weird RPG, with the 2016 release arriving on Switch with a number of new and notable additions. The game draws from a combination of elements from the Fire Emblem and Shin Megami Tensei franchises; Fire Emblem characters make up some of the cast of characters – albeit distinctly altered in appearance – and the turn-based combat and dungeon-crawling features work in the same way as those in Shin Megami Tensei. If you've never played either series before, you have no cause for concern, though. While Tokyo Mirage Sessions FE Encore borrows from other series, it's an entirely self-contained experience with its own story and unique protagonists.

The original release arrived on the Wii U towards the end of the console's shelf life, which meant that it didn't quite get the attention it was due. As one of the most entertaining experiences I had on Nintendo's older console, Tokyo Mirage Sessions' slick, satisfying combat system, memorable characters, and great animation sequences deserve your attention, and now this fantastic RPG has the chance to prove it once again on Switch.

I'm instantly reminded of just how much I love the outlandish concept of Tokyo Mirage Sessions. It follows the story of a group of young aspiring idols in the entertainment industry who juggle their rise to stardom with the battle to save Tokyo from an inter-dimensional invasion of beings known as Mirages. You know, everyday stuff. You play as Itsuki Aoi, a teenager who discovers he is a Mirage Master, somebody who can bond with a Mirage and channel their unique powers in combat.

You'll be spending a lot of your time between inter-dimensional zones known as Idolspheres, which are dungeon areas similar to the Palaces you traverse in Persona. The Mirages all of the main protagonists bond and battle with just so happen to be prominent characters from various Fire Emblem games. Itskui, for example, is the Mirage Master of Chrom from Fire Emblem: Awakening. From Tharja to Cain, all of the familiar Fire Emblem characters have been given a striking Mirage makeover.

One of the first things I notice is just how quick the loading times are as I go from location to location on the map, or enter into a battle. On the Wii U, you'd often be faced with a short loading screen before every fight. In the Idolspheres found throughout the different districts and wards of Tokyo – such as Haraujuku and Shibuya – you'll often be faced with challenging boss fights that require you to grind a little to level up your characters and give them better weapons and skill sets. The combat system is almost exactly the same as the one found in Persona 5, and it's as satisfying here as you'd expect it to be.

When you're running about the dungeon areas, Mirages will sporadically pop up and if you run into them, you'll begin a battle. The turn-based combat involves selecting a move to use on an enemy for each character, with various bonuses and special attacks to trigger. Thanks to the speedy loading times on Switch, this whole process feels like less of a slog this time around, and I never once found myself getting tired of the combat throughout the game as a result.

Another reason it feels less grindy this time around is thanks to the additional content Tokyo Mirage Sessions FE Encore introduces. While the original release did receive DLC that added new dungeon-like areas to help you level up, but I never had the chance to experience it the first time around. Thankfully, this Switch re-release includes all of the original DLC (as well as some new additional content), and it's all the better because of it.

Tokyo Mirage Sessions FE Encore also features a new zone known as the Area of Aspiration that adds new mini chapters known as EX Stories. These EX Stories also help you get some level boosting in between main story chapters and gives you the chance to unlock brand new outfits your characters can wear in combat. These new outfits nod to other game series, with one of the most exciting for me being the Joker outfit from Persona 5. Yep, you can look like the famous Phantom Thief.

As great as it is to see these new outfits in battles, it's the slight change to the core turn-based combat in Tokyo Mirage Sessions FE Encore that really caught my attention. It's far more satisfying than its predecessor, thanks in large part to many of the game's auxiliary characters jumping into the fray for the first time. In combat, if you hit a target with a move it is particularly vulnerable to, it'll trigger a hit chain known as a Session where other characters join in to deal bonus damage to the enemy.

By letting more characters get in on the sessions mechanic, you can deal some impressive blows, and as I progressed through the game, I was pulling off some truly powerful Sessions. The combat has always been one of the most enjoyable aspects of Tokyo Mirage Sessions, and dealing powerful hit chains feels better than ever on the Switch with the lovable cast of characters and their different abilities.

Star of the show

For the most part, though, if you did play the original release, you'll be retreading a lot of the same ground, and nothing is particularly new when it comes to the core story of the game. Still, while some of the additional content is purely cosmetic, the new outfits you can dress up in have some fun nods to other game series, and the new area and original DLC content makes the combat all the more satisfying.

Tokyo Mirage Sessions FE Encore polishes and improves an already great RPG, making it an absolute joy to relive all over again. If you missed this gem of a game the first time around, the Switch is the perfect place to experience it for the first time. The quicker load times make the many hours you're sure to pour into it all the smoother, and the minor features introduced in Tokyo Mirage Sessions FE Encore add some entertaining new ways to level up your characters. Combat continues to be the star of the show, and the re-release content serves to make it all more rewarding and slick. If you slept on this great game the first time around, now's definitely the time to jump in and experience the fun for yourself.

Here are all of the upcoming Switch games for 2020 (and beyond) or see what exciting releases on coming to other platforms in the video below: