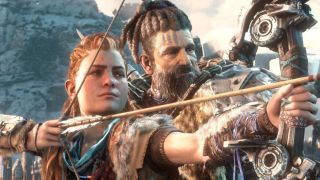 As explained in our Horizon: Zero Dawn review , the PS4's latest exclusive is a spectacular achievement for Guerrilla Games. For a studio that has focussed for over a decade on making largely linear shooters, the shift to a wide open action role-playing game with an emphasis on patiently hunting and trapping crazy robot dinosaurs is deeply impressive. We've had to put together multiple Horizon: Zero Dawn guides and walkthroughs to explain some of its more complex quests. The question is: how are those quests made? Horizon: Zero Dawn lead quest designer David Ford joined us to talk about making missions from a story point of you, how being a Marine informs his work as a game designer, and how to go from Star Wars Galaxies character support to making one of the most technologically advanced PS4 games.