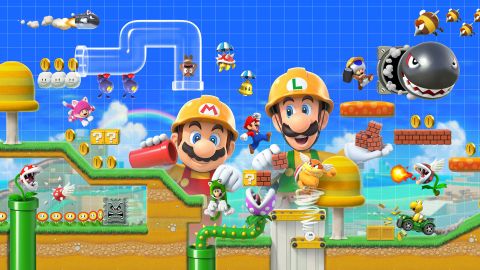 There's a moment when I think I've gone too far. Piranha Plants fill the bottom half of the screen, flying Koopas the top half, and somewhere in between is Mario using swinging claws to propel himself through the madness towards, I hope, a successful finish. But Super Mario Maker 2, like its predecessor, is all about encouraging you to be as mad and creative as you want to be. The tools are all there at your fingertips, it's just a matter of dragging and dropping whatever element of the Super Mario games you want to add to your particular creation.

Super Mario Maker 2 as a Nintendo Switch release was basically inevitable. After its surprise success on the Wii U, despite the console's overall lacklustre user base, and its eventual port to the Nintendo 3DS, bringing the creation tools to make your own Mario games to the Switch was a given. Thankfully, the original game went on quite the journey since its initial launch, gaining new features based on community feedback, and what you get as a result is an almost perfect sequel.

Inspiration oozing from every pore

If you aren't familiar with the first game or its 3DS port, Super Mario Maker 2 is essentially three games in one, and it has an unbelievable capacity to totally satisfy you whatever you're looking to get out of it. The main appeal is the creation tools, which puts every Super Mario gameplay element at your fingertips to use in the building of your own levels, which you can then upload and share with other players. But, along with this there's a robust story mode, and the option to play the creations of others.

Watch our 60 second video review below:

Think of it like Dreams. If you want to create, you can. If you want to simply enjoy the creative talents of others, then that's an opportunity that's never going to stop. Even on this early press build of the full game, there are already hundreds of levels that have been created by such talented humans, who obviously understand the fundamentals of a great Super Mario levels far better than me. In essence, you're getting a fully-fledged Super Mario game with continuously added levels, that both serve as inspiration for your own creations and something new to keep interacting with. Heck, you can even download the ones you really like and add them to your own playlist to play whenever and wherever you fancy.

If you want to get even closer to the Nintendo developers though, and get inside their heads somewhat, it's more than worth diving into the game's story mode. There are 100 levels of professionally pre-made goodness, through which you need to earn coins to rebuild the Mushroom Kingdom castle. The Undo Dog sadly went a bit AWOL and destroyed all your hard work after rebuilding it the first time. Oops. There's a huge emphasis on showing you the ropes, and providing inspiration as to what you can create elsewhere. But at its heart it's also just a really good Super Mario game, with a special Luigi Assist mode that lets you give yourself power-ups, or add elements like more blocks to make a tricky level slightly easier.

It works out as a magic blend of classic and creative Mario gameplay, and if you're not too familiar with the complexities of Super Mario Maker's creative mode, it's a great place to start. Although, complexities is probably the wrong word, because even someone as rusty / inexperienced as me can quickly create something that is at least functional. Add some blocks, some enemies and anyone can make a basic level in no time at all. The more you fiddle about though, the more piqued your creative glands will become. You can create puzzles, add platforming challenges, and even set a course objective that won't let players complete the level unless they've ticked off a certain requirement, like beating Bowser, or collecting all 250 coins in a level. At the moment, you can only set one of these objectives, but that's plenty to get you started.

Unlike the original game too, Super Mario Maker 2 gives you all the assets as soon as you boot up the game, rather than having to unlock them, so if you just want to create you're not penalised by such mechanics. Plus, there are new elements too, like slopes, see-saws and air gusts that propel Mario upwards. The most exciting addition for me is vertical scrolling though, with the option of rising lava, making for quite the fast-paced platforming challenges.

A bit of a squeeze

One thing you will find slightly frustrating though is that the UI is quite cramped. Whereas the Wii U and 3DS versions could spread all the assets across two screens, the Switch has to squeeze all the various menus onto just one screen. There's a lot to poke, prod and generally interact with, from dragging and dropping new elements onto a screen, hiding coins away in question mark boxes, adding wings to foes, changing the size of a platform, or simply getting the positioning of that Goomba just right. Doing that with the stubby poking tool that is your finger, combined with the buttons available on the Joy-Cons, does take some getting used to. But, it's far more intuitive than switching to Big Screen mode for Super Mario Maker 2. Not being able to interact with the screen makes things incredibly complicated, and just downright weird at times, as some things that you can just long press on the touch screen suddenly becomes a counterintuitive button juggle. It's definitely designed as a touchscreen experience.

Where playing Super Mario Maker 2 on the biggest screen really shines though is local co-op. Not only can you create a level cooperatively with a friend, the game now supports four-player multiplayer, with you and your friends taking control of Mario, Luigi,Toad and Toadette. It's chaotic, mad fun, and already players are creating amazing levels that really take advantage of the chaos, like races with sneaky hidden Bowser fights at the end. Course World will let you search for levels tagged with 'multiplayer', and I can see this kind of multiplayer experience seriously enhancing the appeal of Super Mario Maker 2 for families.

The only issue with this is that while multiplayer is available online, you can't team up with your friends. It's all random. You can't create a really awesome multiplayer level and then message your mates to play it with you online; you need to be physically in the room for that to happen. I'm not entirely sure how Nintendo keeps managing to make multiplayer modes quite so complicated, but it certainly feels like a USP at this point.

That doesn't negate just how brilliant Super Mario Maker 2 is though. It takes everything that made the original great, but takes into consideration all those years of player feedback. It really is the complete package of play, create and discover for a game that really won't stop delivering something new.