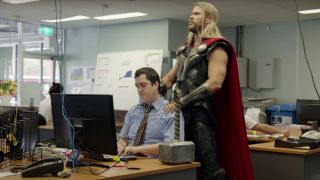 You know you're onto something when your work becomes the focus of a petition on Change.org. That's now the case for Thor: Ragnarok director Taiki Waititi. As well as working on the threequel, he also made that brilliant mockumentary showing what everyone's favorite Norse god was up to during the events of Captain America: Civil War. It really made an impression on Marvel's fans.

One in particular loves it SO MUCH that he's started a petition in the hopes that Netflix will pick up the concept and turn it into a full series.

It's hard to argue after watching the short - and you should, it's right there! - that Thor out in the real world isn't funny. Chris Hemsworth is a comic genius, nailing timing and slapstick-y material with a great deal of skill. But, really, would this work in a TV show format?

I can't see where else there might be to explore after we've seen Thor dealing with the trivial aspects of everyday living. A short web series might be a better option. Something that's a couple of minutes long, showing Thor and Daryl's latest amusing escapade, released once a month up until Ragnarok's release. Kinda like a prequel series. Either way, I hope that more of Thor's loveable humor makes its way into Ragnarok.