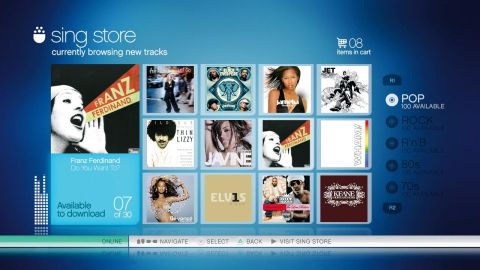 Following the first ever SingStar on PS2, every one of the new games - fromSingStar RockstoSingStar 90's- has been judged and rated on its track list. It%26rsquo;s the only fair way. We know SingStar is the best party-rocking karaoke game out there, but you can%26rsquo;t keep giving every add-on a 9 because of that. It%26rsquo;s been all about the songs. So now - at last - we have a properly brand new SingStar to score. A next-gen revamp of the best singing game that%26rsquo;s ever been. And instead of it being all about the 36 tracks that are included, suddenly it doesn%26rsquo;t matter at all, which is ironic because it%26rsquo;s the best line-up yet. If you don%26rsquo;t like them, you can head straight online to the SingStore and choose from hundreds of other songs you do want to sing along to.

Never played SingStar before? Well, we%26rsquo;ll start with the easy stuff. You open your mouth and sound comes out. Hold the microphone close to%26hellip; oh, we don%26rsquo;t need to start at the very basics, do we? Ok, so here%26rsquo;s how it works: The lyrics appear at the bottom, like on other karaoke machines. Sing the highlighted words. Bars show when to sing a note and the level of the pitch needed. Fill them blue. If you have an EyeToy camera plugged in, you%26rsquo;ll see yourself on screen. Score high to win multiplayer games.

For everyone else, we%26rsquo;ll concentrate on the new stuff and get straight to the meat of it. The basics of SingStar on PS3 are identical to the PS2 games. The big differences are in presentation - it%26rsquo;s now super-slick with customizable wallpapers. New options include being able to save the audio of every one of your performances on the PS3%26rsquo;s hard drive and the automatic taking of snapshots of you straining to hit those Scissor Sister high notes mid-song. Or you can choose to video the whole thing and - for the very brave, or drunk - upload them to your online area to be viewed, rated and commented on (YouTube style) by others.

While it%26rsquo;s hard to appreciate at the time of reviewing before a community has been formed, the whole thing is massively impressive and user-friendly. Get ready to watch some seriously bad singing that you could scare animals with. You never know, a few weeks from now you could be as famous as %26lsquo;that guy%26rsquo; on YouTube singing about Chocolate Rain.