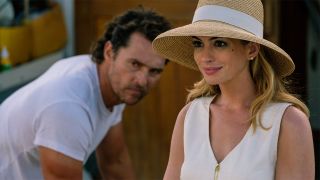 By now, you've probably heard things about the Serenity ending. The Matthew McConaughey and Anne Hathaway led movie is finally out in UK theatres today (with a simultaneous release on Sky Cinema for those at home) after coming out in the US over a month ago, but all anyone can talk about is its mad, bonkers, unexpected twist of a finale. Seriously, what right minded film executive actually signed off on this thing?!

If you’ve seen the Serenity ending, then you’ve already lived through its battier-than-a-cave-full-of-bats finale, which delivers a twist no-one could ever have guessed. But if you haven’t, you’re probably wondering if it’s as unbelievable as everyone’s making out. The answer is yes. Hell yes. So, what happens? Be warned, it’s spoiler territory from here on out as we discuss what happened in that Serenity ending and everything else you need to know about one of the wackiest movies of the year.

Serenity opens on a boy’s eyes, reflected in a computer screen riddled with lines of code. This sullen boy spends most of his screen time in the gloom of his bedroom, staring intently at his computer, before the movie turns its attention to the daily exploits of fishing guide Baker Dill (McConaughey). Dill makes a living taking tourists out on his boat, but his sole reason for living is to catch a tuna called Justice. His dogged pursuit of that fish causes problems that domino across his whole life; he pushes aside paying customers when Justice bites, fires his First Mate Duke (Djimon Hounsou) when he disagrees with him, and, naturally, he starts to hemorrhage money. Luckily, everytime he needs cash, he just has to sleep with Constance (Diane Lane) who will happily pay for a roll in the hay.

The 25 best twist endings in movies we never saw coming

When Dill’s ex-wife Karen (Hathaway) suddenly shows up with a proposition - kill her abusive thug husband Frank (Jason Clarke) for $10 million - it’s the perfect solution to his ongoing financial crisis. He can spend his entire life going after Justice and he even leverages in the caveat that Karen must bring his estranged son to him. His son Patrick lives with his mother and stepfather, and from the flashes that we’ve seen of him in his darkened room, it’s not hard to see that living with his real dad would be safer for him as the sounds of his mother being beaten permeate all of his scenes.

Throughout the first half of the movie, Dill has a strange, ethereal connection to his son, talking to him out loud as if he can hear him, and experiencing a physical reunion with him when he dives into the ocean, only to awake in a puddle back in his shack. This isn’t really explained at the time, but the suggestion is that the Serenity ending will work toward their reunion. And boy, does it.

Everything starts to slide down the slippery slope of incredulity when a skinny bespectacled man named Reid Miller (Jeremy Strong) turns up. He’s spent half the movie trying to track Dill down and finally catches up to him on a stormy night where he tries to sell him a piece of fishing equipment known as a fish finder. After much procrastination and babble, Miller eventually reveals the truth to Dill: He’s “the rules” of a computer game simulation created by Dill’s real-life son, Patrick. Yes, Dill is told he’s a computer game character.

Dill’s obsession with the fish, Justice? Just a part of his code, his character’s primary objective, if you will. His continued romance with Constance? That’s a part of the game too. Miller’s insistence that Dill use the fish finder - along with free lures from his local fishing shop and radio announcers urging him to catch the fish - are all a part of the game’s “rules” designed to keep Dill on track. Still with me?

However, IRL Patrick is re-coding the game, and essentially changing the rules, so that Dill’s objective is no longer to catch the fish, but to murder someone. Why? Because Patrick’s real-life fantasy is to murder his abusive stepfather. And if you’re wondering why he’s living out his fantasy in a fishing game simulation of all things, it’s because his favourite memory is of fishing with his biological dad who died in the Iraq war.

With Dill now fully aware of his predicament - just to reiterate, he knows he’s a video game character - he barrels ahead with the plan and together with Karen, murders Frank. As Patrick, sat at his computer, witnesses this happening inside the simulation, he realizes that he can also change his circumstances. He hops down from his computer chair, picks up a knife, and murders his stepfather IRL. He then re-codes the simulation to include an avatar of himself, so he can be reunited with his father. Cue the swell of strings.

Why I love fishing mini games

What’s so utterly bizarre about the Serenity ending is that once you know the truth, everything that’s come before it takes on a completely different tone. When you realise that 99 per cent of the movie takes place inside a computer simulation written by a young boy, the previous scenes, which came across as stilted and awkward, are suddenly explainable. The whole movie is the creative output of a sheltered kid with limited understanding of complex story-telling and even less knowledge about adult life.

Suddenly, Karen’s overly-stylized, faux-chic, Jessica Rabbit-wannabe entrance, the awful dialogue and terrible line deliveries that make you cringe, and the weird, jerky movements of characters that go unacknowledged all make sense. They’re all supposed to be like that. It’s all a by-product of a fishing game-turned-revenge plot penned by a grieving adolescent. I did warn that the Serenity ending is incredibly, deliciously, unbelievable.

There is one final implication that I want to leave you with that’s far more unsettling though: the very unsexy sex scene between Dill and Karen that’s bookended with a brutish “I win” from McConaughey as he does up his fly? That magic movie moment was coded BY THEIR SON. Now let that sink in.