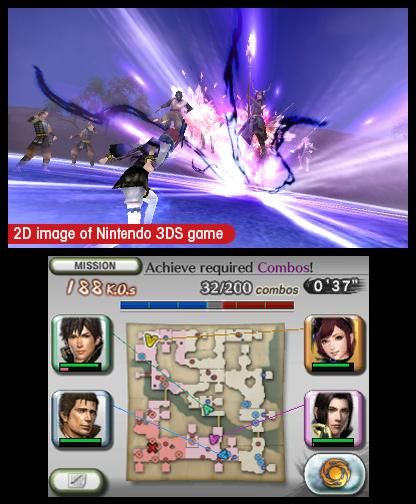 If you’ve been a gamer for any length of time, you’ve probably heard of the various Warriors franchises by Koei. These titles see you in historical settings (typically Chinese or Japanese) and have you battling your way across entire continents alongside historical characters both great and minor, with fighting styles ranging from mundane sword attacks to fantastical dark Magic. Samurai Warriors: Chronicles is unique amongst the franchise in a couple of ways, mainly because it’s a launch title for the 3DS. It’s certainly cool at face value to control a soldier on ancient battlefields, but there are some key problems with the game that keep it from hitting many high notes.

In Samurai Warriors: Chronicles, you’re going to want to know up front that while it’s technically a game, it’s also a historical re-enactment of events in feudal Japan around the close of the 1500s. This is important to note, because if you’re a history buff and that last sentence excited you, then prepare to have your socks blown off. If you’re not so much a history buff (read: 99% of all humans everywhere, and some of the more intelligent species of chimpanzees), then prepare to be disappointed. The game goes way out of the way of fun to explain with excruciating specificity the circumstances surrounding every battle, skirmish, and minor disagreement, including the ideologies of the opposing leaders, their preferred strategies, and a whole lot of information that has absolutely no bearing on the actual gameplay except to stretch out the time between missions where you get to actually do something.

Out of curiosity, we hit up the wikipedia articles on some of these battles and we found that the facts in the game were perfectly accurate. So, the plus side is that if you pay attention, you’re essentially taking a master’s class in Japanese warfare and politics in feudal times. What’s more, in a truly baffling choice that can only be attributed to Koei really wanting to hit the North American 3DS launch date, all of the voiceover work is done in the original Japanese. This is neat for about two minutes, but it’ll seriously mess with any sense of immersion you might have, as there’s quite a bit of voiceover work in the game and it’s all in Japanese. Don’t speak Japanese? Hope you can read subtitles really fast.

Above: Shut up so we can pound you into custard, already

The game utilizes the 3D screen, but not in an especially good way. There’s certainly depth to the battlefield, but the 3D perspective’s not as well realized as say, Pilotwings, and it’s certainly not as eye-popping as Super Street Fighter IV. You won’t be missing much by just switching the 3D off, and it’ll probably save you some battery life. There is the option in the game to exchange Nintendo Play Coins for in-game gold but you only get 100 gold per coin, which is a piss-poor exchange rate, believe us.

The battles waver between fun and futility. The control scheme is fairly standard for a brawler - light, heavy, and super attacks which can be comboed to rack up damage on the enemy. You’re going to be required to swap between controlling your main character and your allies, which means that the difference in combo execution between various characters’ play styles can put you at a heavy disadvantage when you’re required to control them, which sucks, because you ARE going to have to control them. After a few missions, you’ll realize that your allies have a raging case of stupid, and if you don’t take direct control over them they’ll not only be largely ineffective in combat, but they’ll actually sometimes stand perfectly still, gormlessly watching as the enemy commanders ride right by them into your home base and slaughter your women and children while you were off trying to single-handedly win the war. While you can issue very simple orders to your allies, like “go here” and “kill this,” their ability to do anything of any real benefit is highly dubious. The best-case scenario is that they pin an enemy officer down in one place long enough for you to solve every other problem on the map and then come and actually kill the prick, which could be equally as well accomplished by a damn toll booth.

Above: It worked in Blazing Saddles

Despite all of that, the game still manages to be fun at times. When you handle your character-swapping just right and rout the enemy, it feels great. But it doesn’t happen often enough, and most victories are narrow wins. The first few missions aren’t too hard, but then the difficulty curve turns into less a curve and more a brick wall. If you find you’re stuck on a mission, you can re-play old ones to gain extra XP, weapons, and money, but if you have to re-play missions you already beat to be able to progress the story, then it becomes obvious that there’s some serious pacing issues in the game progression. There are also some brief “friendship building” dialogue scenes between missions that serve to break up the action. You’ll have a brief conversation with a character of your choosing, and depending on your response to their questions, they’ll come to like you more or less. We haven’t noticed any tangible effect on gameplay because of these relationships, but it’s nice to be liked, we guess.

There’s a fun game lurking underneath the surface here, but lazy voiceover decisions, overly-dry, didactic lectures between missions, and wall-punchingly frustrating ally AI keep the bright qualities of the game from shining through. Fans of this brawler franchise might find some fun here, but everyone else should stay clear.