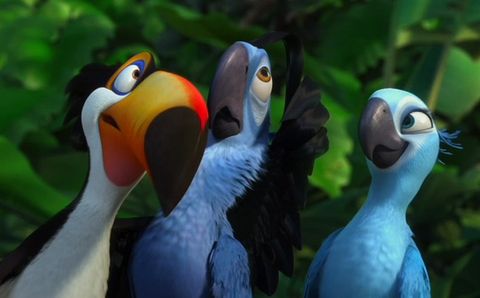 Birds of a feather samba together in the latest animation from the Ice Age team, which finds a domesticated macaw from small-town Minnesota shipped off to Brazil so he can propagate his species with a pretty polly that quickly has his heart a-flutter.

Sadly, Jewel (Anne Hathaway) has no time for a meek beak like Blu (Jesse Eisenberg), particularly as he hasn’t even learned to fly. But when they’re kidnapped by a trio of bird-brained smugglers, they are forced to join forces in order to secure their freedom.

As colourful as its heroes’ lovely plumage and with some pleasing aerial set-pieces above the peculiarly non-teeming streets of Rio de Janeiro, director Carlos Saldanha’s film makes for a jaunty contrast to the freakishness of Rango.

Shackled together for much of the story (The De-Fly-ant Ones, perhaps?), Blu and Jewel make an appealing couple in an adventure that takes in all the key sights (Carnival, Christ the Redeemer, a conspicuously well-ordered favela) and a large selection of supporting characters (helpful toucan, slobbering bulldog, cheeky monkeys).

Flight Of The Conchords’ Jemaine Clement, meanwhile, steals scenes with abandon as a nasty parakeet called Nigel – proof that every good movie needs a Cockatoo.

Yes, the sassy budgies voiced by Jamie Foxx and Will.i.am are uncomfortably redolent of Dumbo’s politically incorrect crows, while the simpering romance between Blu’s owner (Leslie Mann) and Rodrigo Santoro’s avian boffin never gets off the ground.

Rio itself is also a far more diverse and fascinating metropolis than the one depicted here, an urban paradise that feels transplanted wholesale from a glossy tourist brochure.

OK, so this was never going to be City Of God. But if the next gen of 3D ’toons are going to be set in the here and now, they are surely going to have to find a way to present the world more like it is, and less like some cynically sanitised, laughably airbrushed Epcot.