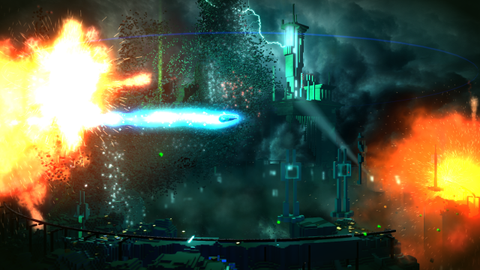 Behold, the PS4's most cost-effective eye candy. Here's the thing: PlayStation Plus members get Resogun free for a limited time, and the PS4 comes with a 30-day free trial of PS Plus. So really, if you want to find out if Resogun is worth your time, you might as well download it the second you crack open your fresh jet-black console. The abridged answer is yes, Resogun is a worthwhile arcade shooter--but allow me to explain why it falls short of being the PS4's Geometry Wars.

Before I delve into the nitty-gritty of gameplay, there's something you should know: Resogun is pretty freakin' beautiful. Not in a photorealistic kind of way; the visuals are mostly voxel-based (think Minecraft), dressed up with a laser light show of deadly plasma and coursing electrical beams. It's more a disbelieving "how in the frack is there no slowdown?" sensation, because there's so much flying around onscreen on a second-to-second basis. It's borderline sensory overload.

Your task is to pilot one of three ship types through a circular 2D plane, like an HD version of the arcade shooter Defender that wraps into itself. Resogun is technically a twin-stick shooter, but you can only shoot left or right; this puts much of the skill ceiling on how well you can dodge and weave, which is a boon for any good shmup. The thrill of threading the needle between two incoming projectiles or zigzagging around hostile ships keeps Resogun consistently exciting, with minimal downtime between incoming waves. It sounds like high-scoring heaven--but that euphoria is soon shattered by the primary scoring mechanic.

To rack up optimal point totals, you need to do as your commander's disembodied voice instructs: SAVE THE LAST HUMANS. While fending off waves of regular enemies, destroying UFOs with green auras will free one of 10 humans from captivity. These dinky stick-figure citizens must then be scooped up and delivered to hubs around the map; save 'em all, and you'll rack up mondo point bonuses. The problem is, saving humans dictates the pace of each level, yet the visual cues for all these interconnecting parts get utterly lost in the unending neon chaos.

Time and again, I threw up my hands in confounded frustration--because unbeknownst to me, I had doomed yet another human to an undignified death. Turns out, certain ships that release humans upon death will dip into the playfield for a few precious seconds; once they're gone, that's it. The only way to avoid these demoralizing screw-ups is to keep a close eye on the HUD. And who wants to have to glance at the upper-left corner of the screen every few seconds, away from all the gorgeous twitch-shooting action? Nobody. You don't need to rescue every human--or any, technically--to complete a level, but your final point tally will be pathetic if you don't.

Unfortunately, Resogun's online co-op is a bit of a bust, if only because it pales in comparison to the smooth action of single-player. Setting up a match is simple enough: co-op is two players max, so all you need to do is join or create a lobby. But once you're in-game, things start to fall apart--and we don't mean all the voxels. Because you're so used to Resogun running any 60 fps, any connection lag seems ten times as drastic. Weirdly, the voxels continue to move smoothly, even as your ship stutters around the screen. Also, when you're dead, you simply spectate your partner until they die or beat the level. The only highlight of co-op is when your buddy activates a bomb from the other side of the map--the blue plasma wave coming from somewhere other than your own vessel feels like an awesome act of God.

The particle count at any given moment will make your jaw drop, and Resogun never dips below a butter-smooth 60 fps. Destroyed ships burst into bits and pieces, which pile up on the ground--a visual effect that impresses but never distracts. And remember when you were just a youngster, gazing in awe at the cascading cards at the end of a Windows Solitaire match? Every Resogun stage ends with Armageddon, as the entire level explodes into seemingly millions of cubes. It just doesn't get old, and feels just as absurdly high-tech as those card waterfalls did back in 1990.

Depending on your skill level--and the difficulty level of your choice--you can see everything Resogun has to offer within a couple of hours. The three ship types are marginally different, with no unlocks or variants, and there are a scant five levels to shoot through. All that's left to do is chase high scores, the best method being a full playthrough in one sitting. That's all well and good, until the overly difficult boss fights put the kibosh on your almost-flawless run. The final baddie in particular only seems to take damage when it feels like it, and you'll be left wondering if the second boss really is supposed be that tough. Maybe I just suck; maybe it's an overly challenging roadblock to progression through an already brief game.

But perhaps Resogun's most disappointing fault is a lack of local co-op, because we would've loved to have played with a couch-bound friend. Yes, the first Geometry Wars: Retro Evolved was also single-player only--but GW2 had local multiplayer, as did Resogun developer Housemarque's own Super Stardust HD. There is online co-op, but imagine this hypothetical scenario. You invite your buddy over to show off your shiny next-gen arcade shooter; he or she is amazed, and wants to join in the fun. But nope--your only option is to take turns, watching anxiously or playing under the pressure of an audience. It feels like such a missed opportunity.

Make no mistake, playing Resogun in short bursts is an adrenaline-pumping good time. But the longer you play, and the higher scores you pursue, the more it feels like the point-scoring minutiae are getting in the way of your overall enjoyment. Resogun isn't the Geometry Wars successor that PS4 owners might hope for, since it doesn't induce a trance-like focus or as many heart-pounding close shaves. If we could abolish the human-saving mechanic from the game, we'd do so in a heartbeat, because it feels like that's what's holding Resogun back from achieving pure arcade bliss.