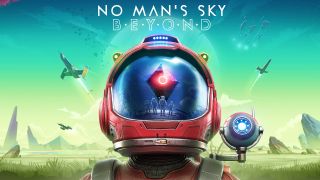 Hello Games is about to attempt a big and well-deserved rebrand. No Man's Sky Beyond isn't necessarily a new beginning, but it is the launch point for what the studio is referring to internally as 'No Man's Sky 2.0'. The truth is, Beyond represents something far more ambitious than that moniker alone might suggest. I know that Sean Murray will hate me for saying this but Beyond is, in essence, No Man's Sky 2 – minus the decimal point, the zero that follows it, and Hello Games' general hesitation to title it so.

After all, the best sequels are an expansion on an original concept, they offer up a big statement of intent for the future, and they work to embrace and thank the community for forming up in support and celebration of a game's successes. In No Man's Sky Beyond, Hello Games is delivering all of that and more. This free expansion has been built around three clear areas of intent: expanded Online play, full Virtual Reality support, and the introduction of an array of new features, systems, and sweeping quality of life improvements arriving under the banner of 'No Man's Sky 2.0'. The question I've been trying to answer since I walked out of Hello Games earlier this week is this: does Beyond represent the absolute culmination of the No Man's Sky concept or is this truly as far as Hello Games can take it?

Now that Sean Murray has had his "little midlife crisis", he says it's time for Hello Games to be even more ambitious and bold with No Man's Sky.

Many studios – particularly those that have sacrificed themselves to the altar of annualisation – package sequels into new locales. This is an easy way to visually stimulate a tired audience. But Hello Games can't take No Man's Sky to a new location; the game houses all known and unknown locations in the universe thanks to its ever-impressive procedural generation. It's not like a new art direction is on the cards either; No Man's Sky's visual identity and design is heavily entrenched in a style that many of us had feared was lost to time entirely – unless you can find the aisle covering '60s-era of science-fiction at your local dusty bookshop, of course.

And so Hello Games has delivered more than anybody could have reasonably asked of it, expected or anticipated in No Man's Sky Beyond. When you take a step back from it and look at the entire No Man's Sky package, it's actually kind of awe-inspiring – the journey that No Man's Sky has been on across the last three years is astounding, it's now light years ahead of the game that launched in August 2016. This is worth focusing on because – and this is important – Beyond represents far more than three strands of new ideas as has been teased for months. It's something else entirely; a package any other studio would have been proud to call a sequel.

It was time to step back

"The game has become this Jenga tower of features; there are things that have come in – things that weren't in No Man's Sky at launch – that I guess… that I take for granted now," Sean Murray tells me as he reflects on the journey he and Hello Games has been on since 2016. "And, you know, I really wouldn't have done any of this like this on day one; that's why it was time for us, for all of us at Hello Games, to step back from No Man's Sky and look at all of its features together."

When you do this, the true scope of No Man's Sky – and what it will transform into with the release of Beyond – steadily comes into view. The game may look visually similar to the way it did in August 2016, but the experience underneath that is near-unrecognisable. Hello Games has worked tirelessly to not only get on the right side of its impassioned community, but to unite it under the stars.

It's easy to forget just how much has arrived in the game since we all took our first expedition into the void of space back in 2016. It's honestly too much for me to list out for you here, so let's just look at the highlights. Foundation launched in November 2016, introducing base building, freighters, and three new game modes. Pathfinder launched four months later with a suite of new tools and features, from vehicles and online base-sharing to ship specialisations and planetside traders. Atlas Rises in August 2017 expanded the scope of the game entirely with a 30-hour narrative, terrain editing, and a suite of new options for interstellar interaction and navigation. NEXT hit a year later and introduced small-scale co-op, expanded the scale of your operations, and introduced a dizzying array of quality of life improvements across the board.

If No Man's Sky is a Jenga tower that could have collapsed under the weight of its own ambition at any moment, Beyond is Hello Games neatly rearranging the pieces and filling in the structural weaknesses so that it will never topple. Every disparate idea and introduction that has ever made its way into the game has been re-examined and re-engineered to better work in tandem with the broader experience that No Man's Sky can offer. And that's before we even get to any of the new stuff.

The fact that you'll now be able to play the entirety of No Man's Sky in virtual reality – with Hello Games supporting PSVR, Oculus, Vive, and Index at launch – is actually the least interesting component of the package. Don't get me wrong, it's incredible to experience first-hand ( you can read more about No Man's Sky VR from our hands-on earlier in the year), and the ability to shift unimpeded from planet-to-planet from the cockpit of a starship is the true system seller VR has always needed, but it doesn't fundamentally change the scope of the game.

What does fundamentally change play, on the other hand, is Hello Games combining hundreds of additions, alterations, improvements, and quality of life changes – three years of iteration packed cohesively into one universe. It's presenting the type of expanded and unified experience that you'd expect to see a high-concept debut such as No Man's Sky refine out for the inevitable sequel.

Online and co-op isn't just an option in No Man's Sky now, it's a fundamental part of it. Up to 32-players – depending on your platform of choice – will now be able to build bases, complete missions, share resources, trade war stories, and explore the entire universe together. You'll be able to create 'Fireteams' and venture off into the void of space to complete new community missions and weekly content, all of it picked up at the Nexus meeting point.

The Nexus is a new social space that can be summoned upon command – a perplexing structure that defies the laws of time and space to bring pockets of the community together under one roof. It's an area where the community can come together to share ships, emotes, weapons, and generally marvel at the appearance of other travellers and the vehicles they have picked up on their travels. There are shops and spaces to hang-out in, brand new alien races to discover and languages to learn, and – perhaps most impressively – a Base Teleporter that will whisk you away to the constructed base of anybody in the Nexus, to anybody in your Fireteam, or to specific points of interest that Hello Games deems worthy of highlighting to the millions of No Man's Sky players currently populating the universe.

Base building returns to the fore once again, with Hello Games anticipating that players will want to spend more time than ever before building a home – if not thriving communities. Beyond is introducing base building on an industrial scale and logic-based power systems, meaning you'll now be able to introduce functioning electrical systems in and around your base of operations. Murray showed me two examples of how this could be used in the game, highlighting an automated mining system that players can establish to help alleviate some of the grind from resource collection and management; the other example saw a few of the staff at Hello Games construct a functioning Rocket League arena on a planet and were happily playing a game of 3v3. It's impressive stuff.

Settling down in No Man's Sky

But as fun as all of that is, I can quite easily see the real appeal of this in how the large communities that are currently stationed on places like Reddit migrating from r/NoMansSkyTheGame and beginning to create functioning colonies in the game itself. And why wouldn't you want to? You can now ride creatures around on planets, create big farms – full of crops to harvest and animals to milk – and then use those resources to cook and create recipes; you have more control over terrain manipulation and base construction than ever before and you'll even, finally, encounter NPCs while walking out in the wilds. The worlds No Man's Sky generates aren't just magnificent to behold anymore, they are going to feel properly populated.

The endless vastness of space is about to feel a whole lot smaller, and that's absolutely a good thing. The isolated adventure that No Man's Sky launched as is still in there – you can have that experience if you want to have that experience – but the truth is that this game is much bigger than that now. It's a streamlined and social space that is trying to engage and energise players as much as it is attempting to instil a sense of constant astonishment in what it is capable of.

With the latest No Man's Sky update done, is it time for Hello Games to focus on its next idea that's going to be "big, ambitious, and silly" – we sure do hope so.

There's still real magic to touching down on a planet that nobody in the game has yet discovered, but it's also pretty incredible to begin exploring a world in low-orbit flight only to stumble across an abandoned, half-constructed base or a group of players attempting to race creatures across a desolate otherworld. There's so much to touch on in Beyond that it's essentially impossible to get it all down at once.

That's because Beyond isn't an update or an expansion, not really. It represents a milestone, the launch of a sequel in all but name. Hello Games has taken on the feedback from the community of players, it has iterated and refined its systems, and it has worked out how to expand the core-concept of its original idea to its absolute apex – just like any good sequel should. No Man's Sky Beyond is the result of three years of work and you'll be able to experience it for yourself, for free, next Tuesday. Be seeing you, space cowboy.