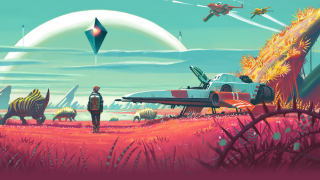 I'm sure you didn't see this coming. No Man's Sky, a game that lets players name the planets they discover (in a galaxy of 16 quintillion planets), has some pretty dumb names assigned to its heavenly bodies. Game director and Hello Games founder Sean Murray felt like sharing a few samples earlier today:

Like right now watching people naming stuff, in our beautiful universe, on our server Journalists ¯\_(シ)_/¯ pic.twitter.com/rbZm4yeX8oAugust 8, 2016

Murray explained back in summer of last year that the game would feature a profanity filter, but that he expected players would find ways around it. "The human race is very ingenious," he said. "They find a way, they'll always find a way to write the name of genitals".

The game isn't officially out yet, but some players and outlets (hey, don't look at us) have managed to snag a few early copies. I guess in a way, they've given us a taste of what we can expect when No Man's Sky launches August 9 for US PS4 players, August 10 for UK PS4 players, and August 12 for PC.

Seen something newsworthy? Let us know at news@gamesradar.com!