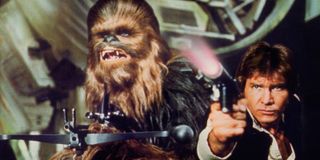 The standalone Han Solo movie is arguably the most daunting movie on Lucasfilm's slate. Indeed, taking one of cinema's most beloved characters and giving him a backstory without the actor who helped make him iconic is going to be quite the challenge, but according to Star Wars concept artist Iain McCaig - who worked on Episodes 1, 2, 3, and 7 - we're "in for a treat".

During a recent conference in New Zealand (via StarWarsNewsNet), McCaig revealed his thoughts on Lawrence Kasdan's Han Solo script; "By far the best Star Wars script, and one of the best scripts period, that I have ever read. I laughed, I cried, I did all the things you should do when reading a good script. You’re in for a treat".

While this is great to hear, it's worth noting that McCaig's affiliation with Lucasfilm means it's unlikely he'd say anything negative about the film. Nonetheless, people like McCaig and Kasdan are very familiar with the Star Wars universe, so there's plenty of reasons to feel optimistic about Han Solo's solo outing.

Directed by Phil Lord and Chris Miller, the Han Solo standalone movie is scheduled to open on May 25, 2018.