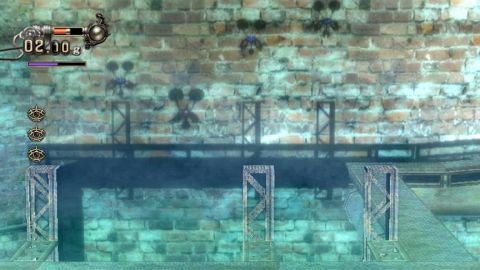 The developers of Lost in Shadow try to squeeze every drop they can from the game’s core mechanic, and they do an admirable job of it. The story follows an unnamed boy who has his shadow separated from his body, and his now-sentient shadow takes a long fall from the top of a tower that looks suspiciously like it came out of the world of ICO or Shadow of the Colossus. The shadow’s quest is to climb the tower and regain his body. This leads to a whole lot of classic 2D platforming, but requires 3D thinking due to the nature of shadows.

Above: Finding a magic sword is always a highlight of any videogame

The first interesting aspect of the game is that you have to learn how to look at a familiar 3D game world in a whole new way. Your character only interacts with objects’ shadows, but those objects are visible in the foreground and background, and all the nuances of how shadows stretch across the landscape come into effect. The boy also has a fairy companion who, we are thankful to say, doesn’t chirp in with “Listen!” or a similar call at all. She stays nice and quiet, and serves as your cursor so you can manipulate certain real-world objects. For instance, when you hold down B, the cursor becomes a sensor and can detect objects that can be interacted with. Usually it involves rotating a pipe, but unlike in a standard 3D game, the actual terrain you deal with as a result is more complicated, since a rotating pipe’s shadow changes shapes on a 2D plane much differently from its 3D counterpart.

This leads to a good amount of trial and error in Lost in Shadow, so player tolerances for that sort of thing should be taken into consideration. Much of it is fun because it’s endlessly interesting to see an object, wonder what shapes its shadow will take, and then view the surprising result. Sometimes it’s irritating because it’s hard to tell if something will kill you when you manipulate it in a certain way, but luckily these “deaths” really just instantly respawn you in the same spot with moderate damage, so the trial and error rarely gets truly frustrating.

Above: The enemies have wonderfully alien designs and attack in all sorts of ways

To progress up the floors of the tower, the boy must collect three “shadow eyes” on each stage. These objects don’t do anything other than open up the gate for the next stage, so they’re just keys really. These eyes are hidden in sometimes incredibly obscure ways, so although the game is 2D and your job is to get from A to B, there is a lot of lateral movement and backtracking involved. Lost in Shadow follows the time-honored formula of showing you something you can’t quite reach yet and then eventually opening the path up, although unlike in say Zelda or Metroid, most of these dangling carrots are solved within a single level, in a more compact fashion.

The combat in Lost in Shadow is simple: you get a sword which you can swing with B, and dealing with enemies requires sticking-and-moving when they attack. It gets the job done and doesn’t get old, since the game keeps introducing new enemies throughout the quest. Note that there is NO WAGGLE whatsoever – everything is done with buttons or the remote’s pointer.

Above: Your health is represented in grams (represented in the upper left), and as you find memories, your shadow becomes heavier, providing you more health

Speaking of which, one of the more interesting uses for the pointer is to slide light sources around in certain spots. Sometimes a meter will appear, either as a horizontal or vertical slider. You can grab onto the light bulb and move it around, stretching and leaning the shadows in the level, which brings platforms close enough for you to grab, or even send pillars shooting skyward while you stand on top of them. As with all the ways to play with shadows, the puzzles become more complex as the game progresses.