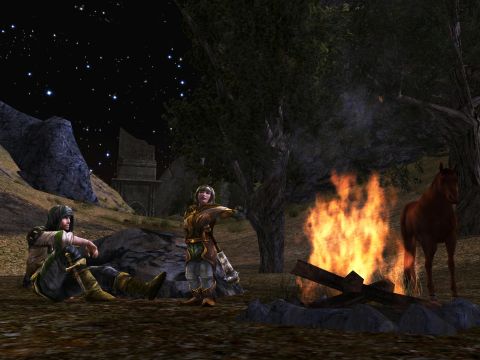 Once they’ve adapted to the various shades of brown, Tolkien fans will of course recognise it as the starting point for the epic battle of Dol Gurdur Tower, which you can eventually participate in as part of a massive three-part 12-man raid that sees you take on a Ring Wraith: one of Sauron’s Nazgul, no less.

And if that means nothing to you, just follow the instructions, carry a big stick and hit anything that moves. War is very much in the offing, and instead of meditating in the lush pastures of Lothlorien, you need to be ready to take arms against any pointy-eared twat that may cross your path, with some intense battles from the start. In the process you may find yourself leveling up to the new cap of 65, which may not sound much, but in reality is laborious for all but the most sleep-deprived loners.

The further leveling is little more than a footnote however, as the real novelty of Siege of Mirkwood is the introduction of the all-new skirmishes. These are essentially bespoke instances that give the more time-conscious gamer the opportunity for a quick blast of action without turning into a hobbit.

Apart from the final assault in the Dol Guldur Tower, the skirmishes can be undertaken by three or six players, or even on your own. There have been complaints about the paltry rewards to be garnered from them, but as ever the game is in constant flux, and the addition of Mirkwood also enforces some significant improvements to the key game.

Essentially though, this is the same old Lord of the Rings Online. If you’ve yet to be tempted by the series, or indeed any MMO, this is a reasonable place to start – a genuinely massive fantasy world where lowly hobbits rub shoulders with evil wraiths. Crucially, with this expansion pack – and regular updates – it looks as if it’s going to be around for some time.