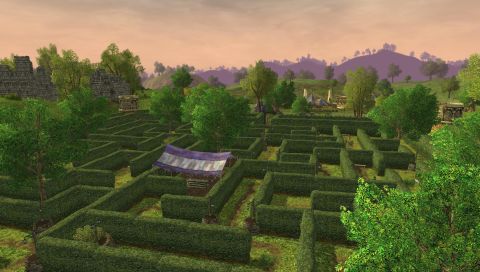 Setting an MMORPG in J.R.R. Tolkien's Middle-earth seems like a blessing and a curse: on the one hand, the meticulously constructed storylines and rich veins of lore; on the other, an ever-growing legion of critical fans who demand perfection. Mercifully, newcomers and long-time devotees alike should recognize this game as a cunningly crafted love letter to the acclaimed source material.

The realistic bent of the art direction might not have the cartoony consistency of World of Warcraft, and the system requirements might seem comparatively steep, but once you've experienced the rolling fields of Bree-land and the squat farms of The Shire, there's no going back to the low-poly angles of Azeroth's contrivances. Every storied location is brought to verdant life, rich with detailed flora, deadly fauna, and huge expanses to explore.

Lord of the Rings Online drinks deep from Tolkien's well, offering up scenes starring the likes of Elrond, Gimli, and Strider right from the beginning, whether you're Elf, Man, Dwarf, or Hobbit. Quests are plentiful to the point of overflowing, and though most follow the familiar pattern of fetching a certain number of animal parts, killing a kind of monster, or running an object from one end of the realm to the other, the story segments that pop up at regular intervals are distinctly memorable, and make players feel like a part of world events and more than just another level-grinding scrub. More importantly, the underlying threads tying adventures together are more convincing and well thought-out than in any other MMO.