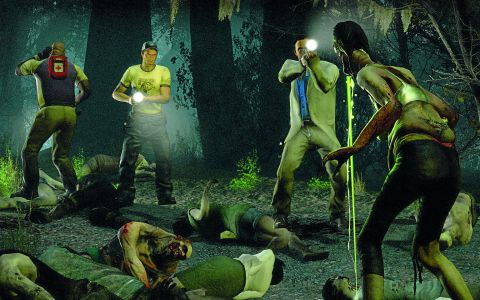 Unlike most other shooters, Left 4 Dead hinges on cooperative multiplayer. You and three friends must shoot, tear and slash through an unrelenting mass of raging zombies. From the moment you leave the safe house to the final rescue chopper, you are completely dependent on each other and constantly hunted by special boss zombies that behave with their own aggressive, strategizing intelligence. Thanks to Valve’s omniscient “AI Director,” the zombies spawn differently every time, the special infected try alternative attacks, and even weapon drops are changed based on your performance. This makes every single playthrough slightly different, and the resultant strategy to survive much more organic and integral than any other FPS on the market. Just like Street Fighter is much more than mashing on buttons, Left 4 Dead is far more than mindless shooting. Played properly, L4D offers 100+ hours of unrivaled co-op insanity.

Surprisingly, Left 4 Dead 2 is able to out-gore, out-scare and out-explode the original in just about every way. Instead of a very grey, kinda boring cityscape, you’re running through hotels, swamps, plantations, riverfronts, malls, abandoned highways, amusement parks… we could go on. The diversity is staggering and ultimately makes each movie-like campaign more exciting, tense and memorable than the first game.

Above: Eerie sunsets and daylight make the horde even more frightening

There’s also a sense of immediacy to the new campaigns not present in the original. L4D2 begins just as the government realizes the infection is widespread and not containable, so you see evidence of the underwhelming CEDA response (that’s a knock at FEMA, btw), and eventually the military’s “blow it to hell” ultimatum. This makes the entire trip, from Dead Center (a blazing hotel) to The Parish (an amazing scramble across a bombed bridge) a hellish nightmare of not just the zombie apocalypse, but also how harshly the outside world is willing to deal with the threat.

This in-your-face, “apocalypse in action” scenario is further bolstered by the addition of vicious melee weapons like crowbars, axes and katanas. Regardless of how good you are, at some point there’s gonna be a wall of zombie flesh up in your shit, scratching and pounding without rest. Normally you’d have to shove them back, shoot and turn to help your friends out. Now you can swing blindly and chop these guys into bloody stumps. Seriously, the blood and gore are much, much nastier this time around.

Above: You’ll see spines, guts, brains -all kinds of innards flying around

And finally, no zombie game/movie/book is complete without a shrieking, rusty chainsaw. Mysteriously absent from the first game, you can now get your zomberjack fix in the most gloriously violent manner possible.

The amped intensity, combined with new guns, items and infected, would have made for a strong successor. But Valve didn’t just push the “sequel” button and give us the same shit on a different day. Next page we’ll explain why.