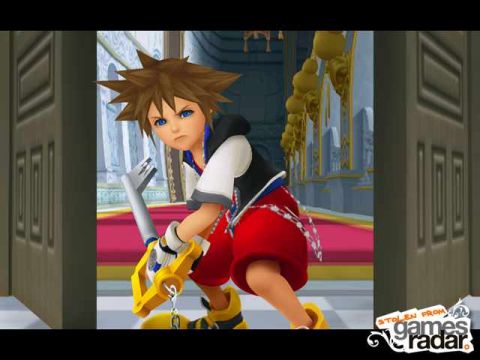 If there’s one word to describe Kingdom Hearts Re:coded, it would be “unnecessary.” In a series filled with finely-crafted, carefully-tuned installments chock-full of plot, action, and fanservice, Re:coded is an anomaly, a wildly uneven mix of gameplay elements that feels like it was rushed out to keep the series in the spotlight. While the game has its strong elements, it’s ultimately rather disappointing for both old and new fans alike.

At first the story seems accessible to the KH unfamiliar – King Mickey, Jiminy Cricket, Donald, and Goofy are working to investigate a mysterious diary, and create a virtual clone of Sora – sans all of his baggage from his past adventures – to dig into the computerized landscapes of the book. It seems like a fresh start, but by the halfway point the game starts throwing out terminology and story points so often that you’ll need the Kingdom Hearts Wiki open next to you to start to make sense of it all.

For a series that features some of the most recognizable and friendly entertainment icons anywhere, KH Re:coded – and indeed, most other recent KH releases - are very unwelcoming to newcomers from a story standpoint. Old-time fans will be elated to see some lingering questions finally resolved, but everyone else will be left scratching their heads. To make matters worse, only a small portion of the game’s cutscenes are rendered in full 3D – most of the game’s dialogue is delivered through the increasingly grating “still talking heads” delivery endemic to JRPGs. It’s a real shame, since Re:coded’s polygon visuals are among the best currently available on the platform.

While the story may be new, the gameplay is essentially the same solid action/RPG adventuring we’ve come to expect from the series with a few notable twists. Sora hacks, slashes, and uses special skills to carve through the hordes of Heartless invading the various Disney-themed virtual environments. Players can also upgrade Sora’s abilities, stats, and skills by collecting special “chips” and arranging them strategically on an elaborate grid. Watching your carefully placed buffs power-up Sora is great, and the combat is fluid and fun, but the game’s camera seems to make every effort it possibly can to sabotage your play experience.

The game’s very rigid progression is also a bit of a letdown. Since Re:coded was originally developed as a series of episodic games for Japanese cell phones, the progression through the various worlds is very linear. Later on in the game you’ll have the ability to go back and revisit old environments, but there is little reason to do so outside of trying to earn bonus chips and special items. Making matters worse is that the gameplay styles sometimes switch dramatically, taking players out of their action/RPG comfort zone and putting them into 3D scrolling shooter levels, 2D platformers, traditional turn-based RPG combat, stealth evasion, hidden object hunting, and more. This wouldn’t be bad if these sections were actually done well – unfortunately, most of the time, they aren’t.

A good example is the 2D platforming sequence, which auto-scrolls, forcing Sora to quickly move ahead constantly – however, it actually re-uses the same attack animations as 3D combat, which move at a much slower pace than attacks in a typical 2D platform game would, making the section hard to control and frustrating. This sort of ill-thought-out implementation of gameplay ideas is all over the place in Re:coded, and almost all of it will make you eager to return to the core action/RPG combat.

Kingdom Hearts wouldn’t have its legions of fans if the games weren’t almost all of a very high quality. This is where Re:coded is most disappointing: It’s a good game with some very solid elements – mostly those seen in past KH titles. But its lackluster storytelling, poorly paced stage progression, jarring gameplay changes, and ever-present, misbehaving camera leave it removed from the greatness we associate with some of the franchise’s previous outings. If you’re completely hard-up for a totally new KH game right this minute, Re:coded will work nicely – otherwise, you’re better off just replaying the far superior Birth by Sleep with different characters