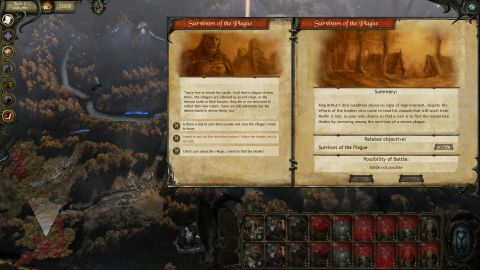 Even hardcore PC gamers will be forgiven for never having heard of the PC RPG/strategy series, King Arthur. That said, we hope gamers will start paying attention to this series as it's one of the most unique and fun new strategy games to come along in a while.

The first game was a fairly obscure title that sought to combine Arthurian legend with the formula established by the Total War games. You lead your army around ancient England conquering castles, enemy armies, and provinces. Along the way you build up your kingdom so you can create better units for your army and expand your kingdom's reach. The key difference between those two games (and what makes the King Arthur games so unique) is a thick layer of RPG fantasy added into the experience.

The soul of King Arthur 2 is its choose-your-own-adventure quests. When you accept a quest, a screen will pop up and a narrator will begin describing a situation. You may be exploring an old magic forge or dungeon of some sort. Eventually you'll have to choose how to proceed. These can be little, random choices like turning left or right (but can still have an impact) or big choices about which of your uneasy allies to betray or which secrets to expose. It's not entirely unlike an old-school text adventure, but don’t let that scare you off.

These quests are based on Arthurian legend so expect a few of them to be a little corny. At this point, most of us in North America and Europe are so familiar with Arthurian legend that exploring one of Merlin’s old workshops with Lancelot seems a bit clichéd on the surface. Regardless, these mini-stories keep the player engaged with tough, impactful choices and are generally well-told by a creepy, slightly unsettling narrator.

The narrator is just one aspect of King Arthur 2's impeccably crafted tone. Everything from the character art, to the loading screens, the soundtrack, the narrator, and the general mood of the story fits together flawlessly to create a unique fantasy universe. That said, it's all presented in a decidedly low-budget way with words and still images comprising the bulk of the story. Gamers weaned on flashy cutscenes and huge production values may be turned off by the low-budget storybook aesthetic. On the other hand, gamers familiar with choose-your-own-adventure stories and text adventures will feel right at home.

King Arthur 2 manages to overcome its low-budget predicament with great storylines that twist and turn based on your input. You'll regularly make major decisions that impact your army, alliances, and even the conditions of an upcoming battle (or whether or not you'll engage in battle at all.)

As an example: one very minor (yet very fun) quest asked us to intervene in a neighboring kingdom after a passing militia had allegedly stolen a religious relic from a Christian church. After confronting them, it was up to us to decide what to do with the alleged thieves. We could turn them in to the lord of the land and gain kudos from a potentially valuable ally, or let them leave and gain the allegiance of the militia's master. Or we could wipe them out. Each side had ups and downs. But it was soon revealed that a thief was hiding in the militia, and after he revealed himself to us, offered to bribe us with a sizeable sum to let him escape with the relic. We'd anger both the other parties, but gain the respect of his thieves group and some cash. Being all but broke (and hobbled by a nearly broken army we couldn't afford to repair) we took the money and got out of town. There are much larger quests than this, but they'd be impossible to relate in this review as each major situation can have 9+ choices (some with unknown results) and are enriched by the constantly evolving drama of your personal relations with allies and neighbors.

The previous game in the series carried all of the same ideas, but caved in under the weight of some egregious imbalance issues (sometimes your army would get wiped out for little reason.) Perhaps as a result of the last game's failure to competently handle intricate strategy, King Arthur 2 shifts the focus far more toward its RPG components.

However, the renewed focus on the RPG side seems to have left some holes in the tactical side. First and foremost, the enemy AI isn’t very good. You'll get a challenge at the higher difficulty levels, but on Normal difficulty you'll be tough to beat if you understand the basics. The game seems to be set up so even a little bit of strategy goes a long way, and you can end up steamrolling the enemy with minimal planning. A basic understanding of medieval war (put your archers behind your front lines and flank with your cavalry) mixed with moderately thoughtful use of your spells (use Fog when advancing to shut down enemy archers, use Lightning to break their front lines) and capturing Victory Locations (which grant your army buffs and new spells) can mean a laughable victory with a kill:death ratio of 8:1. That's not to say there wont be some tough battles, but it's not an especially difficult game.

The other problem is that battles are somewhat rare, but quests are extremely common (comparatively.) So even though the quests are the best part of the game we found ourselves wishing there was more balance. After a while it got tiresome listening to narrated dialog (even though it was good stuff,) and we just wanted to do battle.