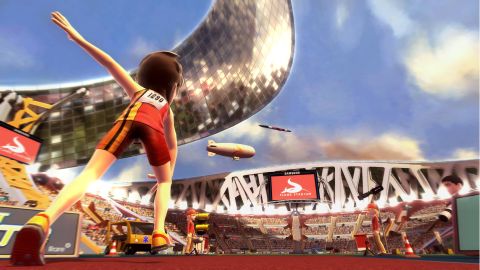 If you already own a Wii or PlayStation Move, you’re likely all too familiar with the wide world of motion-controlled sports. Maybe you’re not one of those crazies who impaled their 52” LCD with a Wii-mote trying to bowl a strike, but you’ve probably participated in plenty of arm-flailing archery, tennis, golf, boxing, and even not-quite-sports such as tossing Frisbees at Wii puppies. Despite the oversaturation of gamepad-dismissing athletics, Microsoft is getting into the game with Kinect Sports.

Like those that have come before it, the Rare-developed Kinect Sports is another compilation of quick, jump-in challenges. Offering mostly familiar sports and a few fresh athletic activities, the get-off-your-fat-ass roster includes Soccer, Bowling, Boxing, Beach Volleyball, Table Tennis, and Track and Field. Featuring a very Wii-like presentation, all sports are surrounded by happy-fun-time arenas and avatars. The enthusiastically colorful presentation offers cool touches, like being able to lead fans in the wave with a swipe of your hand, and lame inclusions, such as fans wearing those big foam fingers everywhere, including bowling alleys.

Like Nintendo’s and Sony’s similar efforts, Kinect Sports has its share of must-plays and avoid-at-all-costs activities. The worst is Track and Field; like the real-life sport it requires lots of running and jumping, but because you’re playing in your living room, these activities must be performed in-place. Unless you’re a hyperactive toddler on a Red Bull bender, this isn’t much fun. Discus and javelin challenges, which have you mimicking the expected gestures are as boring as they sound, and the sprinting and long-jumping should have been left in the locker room. Hurdles, which mixes the run-and-jump routine, offers some moderate entertainment.

Unresponsive inputs and confusing prompts also make the volleyball more frustrating than fun. It has potential with proper controls, but as is it’s too difficult to tell if the action prompts - which tell you when to hit the ball - are signaling you or your AI partner. Connecting with the ball when you mean it feels damn good and hints at the promise of body-controlled v-ball. However, more often than not we missed shots or wondered what the hell was going on even when we did nail a game-winning spike.

Better is the boxing and bowling, both of which provide limited motion control but still effectively immerse you in the real world-mimicking action. The former supports fairly intuitive blocking, high and low punches, and wind-up hits, while the latter lets you line up shots and put spin on the ball. Their controller-free nature surprisingly doesn’t evolve them much past the Wii and Move entries, but they’re the easiest to get into and generally succeed in delivering some spirited competition.

The best of the go-for-the-gold bunch is table tennis and soccer, which is odd considering they take two entirely different approaches to putting you in their respective games. Table tennis offers almost no-handholding, leaving you to decipher its nuances through dedicated practice. We actually weren’t impressed during our first few matches, as it seemed a simple game of mindless ping pong smacking with little room for finesse. However, after seemingly swatting invisible flies for fifteen minutes we discovered the slightest shift in our shots could deliver speed - literal fire, even - and support a more skilled approach. Take the time to learn this one, and you’ll be rewarded with some sweat-breaking back-and-forths.

While table tennis is an easy-to-learn-hard-to-master affair, soccer’s all about jumping in and yelling “goooaaal!“ Rather than going the complicated route, the world’s favorite sport keeps it simple and fun: highlighted track paths take the confusion out of kicking and passing - something volleyball would have benefited from - and blocking is handled by simply touching hand, head, or foot to the goal-charging ball. It’s super intuitive, refreshingly uncomplicated, yet damn addictive, especially when playing a live opponent locally or online.

Speaking of whuppin’ your friends’ hides, Kinect Sports offers crazy amounts of competitive and co-op variations from team-based party play and turn rotations to straight PvP and co-op-versus-AI - it generally delivers more fun when playing with friends. It takes some time to get used to sharing the camera with two people, especially when you’re nearly kicking each other in the swimsuit area during a heated soccer match, but once you become accustomed to the hardware’s scope and reach, you’ll have a better, bruise-free time.

It’s tough to recommend Kinect Sports to anyone who owns either of the Wii Sports entries or PlayStation Move Sports because they’re pretty similar. And with few exceptions, Rare’s completely controller-less take doesn’t bring much to the arm-flailing Olympics. That said, highlights such as beaning a goal-aimed soccer ball and setting ping pong projectiles ablaze certainly make you feel Kinect-ed. If you’re not too keen on soccer or table tennis, then feel free to knock a few points off this score, since those are the main reasons to play the game. Finally, if you’re completely new to the motion-controlled sports world this could provide some decent, active entertainment.