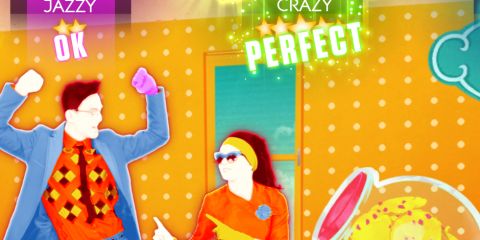 Rhythm game franchises have a bit of a reputation for releasing in annual installments and having not much more going on than a new song list. Just Dance is one such rhythm franchise, and the primary draw here is to offer one more way to dance unabashedly in front of your TV. That said, Just Dance 2014 offers enough new content and an online mode that doesn’t make just make it better than last year’s title--it actually makes it the best in the series.

The core of the Just Dance experience lies in its tracklist, and the songs you’ll dance to this time are as varied as always. Ranging from classics like “I Will Survive” to current top 40 hits like Lady Gaga’s “Applause,” the eclectic list of songs offers something for everyone. The game includes tracks of all levels, and while songs themselves don’t come with their own set of difficulties you can select, it’s still just as easy to start a song and get into the groove of things. That’s because Just Dance isn’t so much a game about accuracy and precision as it is about just getting up and dancing.

Despite its ease, Just Dance will most certainly have you sweating as you play. Once a song starts, a stylized avatar dances on-screen to the music and icons indicate your next move. On the Xbox 360, the Kinect tracks your movements so you need to match what you see on-screen as accurately as possible. Most of the game’s choreography is still rather symmetrical, making it easy to learn what moves you need to repeat, even while adding in the challenge of how to time your movements and when to transition between them. You won’t find a practice mode or tutorials of any kind, but that’s no problem considering you naturally get better the more you play.

Most songs feature one on-screen dancer to follow, but there are also duets and 4-player songs you can select. The game also introduces On-Stage mode, which lets one player take center stage while the rest act as backup dancers. These are great for parties or when you have plenty of people over, as they require you to perform choreography that is meant for more than one person. If you’re playing alone, it can feel strange dancing by yourself to “Careless Whisper” and pretending someone’s there, so it’s a shame these songs don’t include a single-player option. Some of these tracks also feature outlandish choreography that is more theatrical than rhythmic, and you might question why they’re in the game at all.

Each time you complete a song, you are graded with stars based on how accurately you performed each move and are also rewarded with in-game currency you can use to unlock additional content. These Mojo points let you unlock variations to many songs that feature more challenging choreography or a mash-up of various moves from past games. With so many things to unlock, Just Dance not only gives you a reason to keep playing, but it also lets you know your hard work is paying off.

To add to its replayability and even to lessen the woes of playing alone, the new World Dance Floor mode lets you compete with others worldwide in simultaneous dance parties. As soon as you go online, you can join other players and dance together to the same song, vying for the top score each time. You can also see everyone else’s current scores, so this creates a competitive experience despite the game’s casual facade. Even though your opponents may be hundreds of miles away, global challenges and news tickers give you the feeling of being part of a larger community. Matches are essentially drop-in-drop-out, but hourly and daily challenges for extra Mojo points, and even an online leveling-up system, provide great incentives to play.

Considering you’ll be moving around so much, Just Dance also acts as great cardio and its improved fitness mode now lets you track your calories at all times. You can still select 10-, 20-, and 40-minute workout regiments, but the calorie tracker gives you more freedom to play any mode and still find out how much you’ve burned off. Additionally, some songs even include intense choreographies you can unlock that are reminiscent of those in Zumba games--meaning, you’ll definitely get in a good sweat.

Playing Just Dance 2014 on Wii U means you’ll still find all the same songs and features readily available, but a few differences change the way you experience the game. For starters, the Wii Remote is still needed to dance, so you won’t get that same precision as you would playing it in front of the Kinect. In fact, most of the time you don’t even need to move your legs as your score depends on when and how you move your controller and not your body. This makes the game even more lenient for those who can’t really dance, but it can also frustrate players who are accurate with their movements but don’t move the controller enough for things to register.

What the Wii U version lacks in accuracy and precision, it makes up for in its additional modes, making it the better party game. While the Kinect camera lets you capture clips of your dancing to share with others through social media or its online community, the GamePad gives you more freedom to record your friends and create your own mini music videos. Its built-in microphone also makes it easier for one player to take advantage of the game’s optional karaoke features and sing along for extra Mojo points. In addition, a revamped Party Master mode also lets one player choose what moves everyone will dance to on the fly. This mode lets an extra person join in on the fun and adds to the overall silliness of dancing with friends.

From its brightly colored dancers to its lenient choreography, the Just Dance series has always emphasized fun when it comes to dancing. Its new songs and plenty of unlockables give you plenty of reasons to come back for more, and its online mode provides that perfect complement the series has always needed. Just Dance 2014 may not be the most innovative dance game currently available, but it’s definitely an improvement worth dancing to.

This game was reviewed primarily on the Xbox 360.