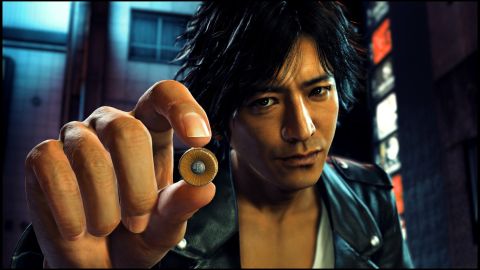 Despite the fantastic story, Judgment stops short of being a must-play thanks to its shallow and unfulfilling crime-solving gameplay.

The Ryu Ga Gotoku Studio can seemingly do no wrong at the moment. Ever since Yakuza 0 gave the adventures of Kiryu-chan and company a latter-day renaissance in the West back in 2017, fans have been eager to return again and again to the hard-hitting action in Kamurocho, Japan. And so: enter Judgment.

At face value, a detective game set in the Yakuza universe seems like a match made in heaven. But, although the story is as compelling as any of the past dramas involving the Tojo Clan, the repetitive gameplay and refusal to stretch beyond its Dragon Engine-mandated confines means a potentially spectacular end result is not as elementary as you might have hoped.

But let’s rewind a little. Judgment sees players step into the shoes of disgraced ex-lawyer Takayuki Yagami, a hotshot who manages to get a case involving an alleged serial killer thrown out. The client, however, ends up killing his girlfriend in cold blood. Wracked with guilt, Yagami leaves the law game and becomes a private detective, flanked by his ex-yakuza partner, the hot-headed Kaito – a surrogate for Kazuma Kiryu if ever I’ve seen one.

This is where the player takes over: on the hunt for an eye-gouging serial killer bumping off members of the yakuza three years later, Yagami finds himself wrapped in a case that has the hard-boiled story beats of a Raymond Chandler novel or a particularly compelling series of Line of Duty. Corruption runs amok and it ends up peeling off the layers of Kamurocho’s seedy underbelly more and more until it reaches the very highest levels of the Japanese government.

Just when you think you have figured out whodunnit, the game pulls the rug out from under you in devastating fashion. You’ll be eager to keep playing, too, thanks to a fantastic ensemble cast and a TV show-esque structure that even includes ‘Previously on…’ recaps at the start of every new chapter.

The story is undoubtedly the high point, not only for the series but as potentially one of the best in the medium. It pulls no punches with its unflinching portrayal of criminal corruption, nor does it ever truly spell out who is right and wrong in every given situation. It’s a compulsive a crime drama as you’re likely to find on console.

The case of the serial killer The Mole, as Yagami bizarrely calls him, eventually spirals out into a tale that unravels with each passing chapter, one that is filled to the brim with conspiracies, double-crosses, and betrayal after betrayal. If this was playing on HBO or Netflix right now, it would be the gold standard. Yet, this video game can only put together half of the pieces. The video part is incredible; the game less so.

The game is afoot - and not particularly interesting

In Judgment, Yagami must help move the story along and crack the case by collecting evidence and presenting it to witnesses. Unfortunately, the core gameplay on offer, which includes lockpicking, chasing targets, wearing disguises to infiltrate areas, and general crime scene examination, is severely lacking in its execution. The game absolutely refuses to go all-in on the detective side of things. Instead, you’re left blandly hovering around bodies, replaying the same minigames over and over, or hammering buttons in QTE events – something we probably should have left behind by now in 2019.

Interrogations, and actually getting sweaty, palm-itching witnesses to fold under pressure, could have been interesting, though doesn’t really go anywhere thanks to its lack of depth. The illusion of choice is fleeting and, instead, the only peril or penalty found in the game is not getting a tiny amount of extra XP for asking things in a more logical order, or Yagami screwing up and making light of the situation before giving the player another stab at choosing the correct response. It’s hardly a cerebral, chin-scratching experience.

This, when coupled with the interminable tailing mechanic which feels like it’s ripped straight out of a PS2 game, may disappoint those looking for another Danganronpa or LA Noire-style experience.

So, while the story itself is fantastic, it’s an impeccable narrative that works in spite of the gameplay. It’s particularly galling, too, that there’s rarely any courtroom action. Just doing all the case legwork without bringing it home in a grandstanding finale at the end of a chapter feels massively unfulfilling and removes all agency from Yagami. He’s simply a character along for the ride, watching as others get to make all the important moves.

You’ll soon find that the game itself doesn’t even have faith in its core gameplay mechanics, with the tried-and-tested combat of previous Yakuza comes increasingly coming to the fore instead. The second half features Yagami relying heavily on rearranging facial features of yakuza members and various criminals instead of predominantly sorting through clues across several enticing whodunnits – which says it all.

Beaten to the punch

It doesn’t help, either, that there’s a serious disconnect between what Yagami is and what he does. Namely, he’s not a burly bruiser in the shape of a Kiryu or even a Goro Majima; his need to pound on some poor soul to get information presents a massive narrative disconnect that can’t quite be shaken off. It’s indicative of Judgment’s slavish need to rely on the framework presented by past Yakuza games. Punching people really, really hard gave Kiryu all the answers so it must work for Yagami. Judgment’s combat also lacks the brutal balletic finesse that was found in previous entries.

The two combat styles – Tiger and Crane – differ enough for you to get use out of both, but you’ll probably be resorting to the same well-worn combos over and over. It sure is fun, though, and you will be just as entertained ever by taking a bicycle and giving the person on the receiving end of a handlebar a one-way trip to the dentist.

There is one new combat feature to be aware of: Mortal Wounds. Being shot or hit with a charged boss attack means your health bar is permanently reduced until you find a doctor. It’s a double-edged sword: this makes longer combat sections (of which there are surprisingly many for a supposed detective game at heart) a real slog, and could even find you reloading old saves more often than you’d like, though it ups the challenge considerably and has you thinking on your feet when the going gets tough. At least it’s different and, crucially, interesting enough to be worth its inclusion.

If sleuthing and slapping fools silly gets old, then you will be pleased to see Judgment go massively OTT with the side content. There’s dozens of hours of content here, which is extremely generous on Ryu Ga Gotoku’s part. The likes of the batting cages and Club SEGA arcades return, plus the extremely entertaining Drone Races are a welcome addition.

It shouldn’t be discounted that the game even has 50 Side Cases to get stuck into as well. While the mileage may vary on some of the more obtuse activities – VR board game, anyone? – it cannot be argued that Judgment doesn’t give players value for money. It helps that it maintains its mix of kooky Yakuza humour in Side Cases (such as chasing after a bald man’s wig) and more serious melodrama.

Judgment, though, always seems like it’s a little too mindful of attempting to pull off the tricky balancing act between appeasing Yakuza fans and appealing to newcomers. This is undoubtedly a hard game to recommend for newbies.

It’s better suited to understanding the Dragon Engine before anything else (the solution? Go and play Yakuza 0) and series vets may lap up the game, yet be disappointed by its meandering detective offerings. Yagami, meanwhile, is less instantly magnetic than Kiryu. While the ensemble cast is stronger, it’s impossible not to wonder if playing a full-fat Yakuza game is a better option instead.

Although it’s possible to overlook the (albeit entertaining) reliance on combat, and I beamed with joy when I discovered just how much there is to do on the dingy neon-lit streets of Kamurocho, the halfway house of Judgment is guilty of never truly committing to being the dazzling detective game it could have been.

Therein lies the problem. Judgment is a Yakuza game in detective’s clothing – but it never really excels at doing either particularly well. The story is superb, and shouldn’t be passed up for those in need of a great 20 hours of genuinely compelling intrigue, yet the gameplay betrays its best-in-class plot. Simply put: It’s boxset brilliance let down by mind-numbing detective work. Here’s hoping a sequel irons out the kinks and fleshes out the snooping some more. If so, it could have the makings of an all-time classic series – and this is a fine, if slightly shaky, first effort.

Despite the fantastic story, Judgment stops short of being a must-play thanks to its shallow and unfulfilling crime-solving gameplay.