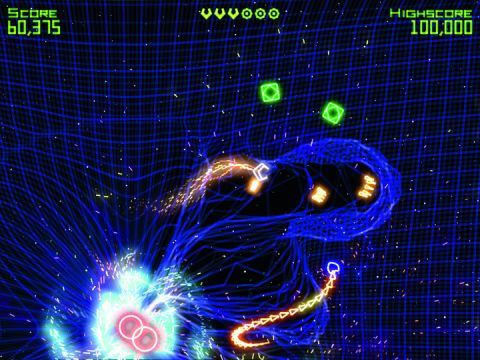 So it turns out Windows Vista was one big Trojan horse to get Geometry Wars: Retro Evolved on the PC. Vista crept onto the newest PCs, waited until darkest midnight then Pow!, delivered a Xbox 360 Live game straight to the back of the head. We're still throbbing.

You're a little claw-shaped ship at the center of a swarm of enemies. Movement and shooting are controlled separately, both with a full 360 degrees of freedom so that you can slip away and fire at the same time. All you need to do is keep alive while weaving between the bad guys. They don't fire, but a collision is fatal so you must keep dodging. If that seems a familiar concept, it's because the Retro Evolved moniker is a truism: think Robotron 2084, polished up like your mom's coming to visit.

It's a taut game: there's a thin line between surviving and being obliterated, just the merest flick of a thumb can change your destiny. Each enemy has its own pattern of movement; there are the passive X shapes that completely ignore you, the scared green squares that follow you but flinch at the bullets. There are snakes, clones, squares that break up into smaller squares. And then there are the black holes.

Apparently just inert orange circles drifting through the level, if you leave the black holes alone they're fine. But as soon as a bullet hits, things get a little sucky. Whatever mystical power your missiles have kicks off the black hole's powers, and the gravitational draw begins. Anything caught in its grasp will be sucked in. Yet although it's a threat to you, it can also be used to clear up the screen of enemies, with you playing Pied Piper. If you're smart, black holes become a big tactical advantage, although you must keep firing at them or they'll explode, sending a shockwave of shrapnel (small circles) that flood the level.