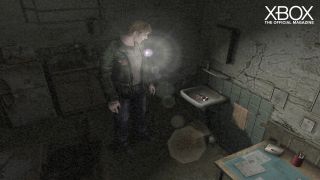 We all love a good Xbox bump in the night. Horror games have been chilling and thrilling fans of Microsoft consoles for almost 20 years, with an enduring appeal like few other genres. After all, who doesn't love being scared silly? Whether being creeped out by the wails of coffin-dodging cops in last year's Resident Evil 2 remake or fretting over Silent Hill 2's gnawing brand of psychological dread, the history of survival horror on Xbox is bloody terrifying. Join us as we look back on it... then immediately hold us.

Video games have been tingling our collective spines for decades now. Long before the original Xbox launched in 2001, twisted, nerve-shredding games from the East helped define the survival horror genre, forever changing the medium in the process.

To trace the precise origins of gaming horror, you have to go back to the early '80s. Over a decade before Resident Evil served up Jill sandwiches, a Japanese student crafted a frightening adventure that was indebted to a certain chest-bursting Xenomorph. Partially inspired by Ridley Scott's masterful Alien, and taking cues from a stealth title called Manbiki Shoujo, Akira Takiguchi's cheekily named Nostromo saw players trying to escape the gaze of an unseen extraterrestrial.

Released for the Commodore PET 2001 in 1981, it was years ahead of the undies- soiling curve. Nostromo somehow squeezed in elements of resource management long before it became such a well-worn mechanic; the spaceship's survivor forced to collect key items to escape the vessel. Looking back, you can probably blame/praise Nostromo for Resi's divisive item box system.

Skip ahead 15 years, and the most important moment in the genre's history would occur with the release of a game that defined jump scares like no other... Resident Evil. Shinji Mikami's masterpiece was originally conceived as a remake for Nintendo's NES classic Sweet Home, before evolving into the Spencer Mansion spook-'em-up it was always destined to be. Campy yet captivating, it helped coin the phrase 'survival horror', helped rocket the PlayStation into the sales-breaking stratosphere, before spawning a genre- defining juggernaut that endures to this day.

Twenty four years on, Capcom's constantly morphing franchise continues to terrify, with Leon and Claire's Raccoon City remake deservedly claiming Official Xbox Magazine's Game of the Year in 2019. How our shattered nerves love Resident Evil 2. Capturing the collective imagination of a generation of players like few titles since, the original Resi made an indelible impression on '90s gaming. The moment that undead Doberman smashed through the most famous window in games, a horror icon was born, and the roots of a truly iconic series cemented. As this landmark spookster predated Xbox by 15 years, Team Green fans were forced to wait for 2015's excellent Resident Evil HD remake to finally get in on the zombie-whacking act.

Launching within a year of the original Xbox, Konami terrified gamers with an entirely different breed of horror. Whereas Resi was all silly lines and obvious 'gotcha!' scares, Silent Hill 2 was more insidiously upsetting. Telling the story of the emotionally distraught James Sunderland, it dealt with themes of guilt, grief and sexual violence in a way few games have the guts to address even now. The Japanese publisher had an instant classic on its hands. It's just a pity the series has skulked into the shadows in the intervening years, with its last proper appearance on Xbox coming with 2012's crummy Silent Hill: Downpour.

These early days of Xbox horror also featured one of the most pleasantly surprising movie spin-offs to ever surface. Coming two decades after John Carpenter's body-morphing horror hit, Konami's tardy tie-in The Thing delivered frostbite frights as it made you question the every move of your AI squadmates. Were they really themselves? Did they just give you a funny look? Were they in actuality a scuttling alien parasite who'd taken the form of one of your permanently parka-covered pals? Sowing seeds of terrifying doubt, this paranoia-laced horror captured its movie's chilling spirit long before Creative Assembly nailed the mood of Ripley's universe in Alien: Isolation.

That same year, two very different horror titles hit Xbox, in Dino Crisis 3 and Fatal Frame. While the original T-rex terror was in thrall to Resident Evil, DC3 blasted the series to space – no, really – subsequently making the cult franchise extinct. Fatal Frame's approach to survival horror was a little more subtle, with unnerving ghost hunts that involved capturing spectres through the lens of an antique camera.

With the arrival of Xbox 360 in 2005, horror games evolved to match this more advanced tech. Hitting shelves alongside Microsoft's new console, Monolith's Condemned: Criminal Origins has to go down as the most unpleasant launch game of all time... and we mean that as a compliment. Heavily inspired by David Fincher's serial killer thriller Seven, this grizzly horror is part first-person melee brawler, part the most disgusting episode of CSI you ever did see – its clever forensic puzzles are repellent. A year later, Monolith would release FEAR: a trippy, time-bending horror shooter where your soldier is plagued by hallucinations of a sinister girl.

2008 was another big year for horror, with a number of ghastly titles gracing Xbox 360. Alone In The Dark launched in June to spook up the summer, though its horrible dialogue and glitchy puzzles failed to do justice to the pioneering 1992 original. Thankfully, horror fans didn't have to wait long for a true terrifying great. EA released the brilliant Dead Space that October, with Isaac Clarke's fraught battles against beastly Necromorphs capturing the over-the-shoulder tension of 2005's game-changing Resident Evil 4.

Even if no one can hear you scream in space, they can damn sure watch you get torn to shreds – Dead Space's limb-lopping 'strategic dismemberment' was a revelation.Rounding off a truly frightful year was Valve's Left 4 Dead: a tight co-op shooter that promoted selfless teamplay like few other games. A 2009 sequel would again capture the zombified zeitgeist, with Valve's undead firefights proving to be the must-have Xbox Live experience of the era.

Sadly, the next few years for Xbox horror fans were downright chilling for the wrong reasons. Capcom sadly stunk out the joint with Resident Evil 5 in 2009, starting a downturn for the franchise. Somehow 2012's Resident Evil 6 was even worse than Chris and Sheva's confused African adventure. Throwing all the undead s**t at the fan, its trio of try-hard, interlinked campaigns marked a real low point for the iconic series. It would be a full five years until Capcom released another mainline entry Resi.

At least fright fans could cheer themselves up with Deadly Premonition amidst all this Umbrella-sponsored sadness. Alright, so Hidetaka Suehiro's twee horror looked awful by 2010 standards, but its dark, Twin Peaks- inspired mystery at least lit up the interwebs with a thousand coffee-sipping memes. A year later, Isaac Clarke would return to kick oodles of undead ass in the incredible Dead Space 2. If there's a creepier enemy in the history of survival horror than those peekaboo Stalkers, they've yet to invade our sweaty night terrors. It's just a pity Clarke soiled the space linen in 2013's Dead Space 3; a lacklustre ice world threequel that sent the Xbox 360 horror series out with the weediest of whimpers.

Six months after Isaac's frosty frightener put Dead Space into stasis, Xbox One launched, ushering in a new era of video game horror. Within Xbox One's first year on sale, a trio of high-profile horrors would chill Team Green players to the bone. Found footage fright-fest Outlast is a squirm-inducing chiller; a short and sharp indie that terrifies through its barely visible environments and upsetting amount of exposed wangs. Next time you film footage on your camera phone, definitely don't take a trip to a mental asylum crawling with starkers inmates. Happily, The Evil Within had fewer virtual schlongs. Despite being riddled with tech woes, Shinji Mikami's gruesome 2014 horror kept Resident Evil's spirit alive while the series was on hiatus.

That same month one of the all-time great survival horrors would slither onto Xbox One. In Alien: Isolation, Creative Assembly didn't just deliver one of the most terrifying games ever, it created arguably the greatest licensed game of all time. Amanda Ripley's hide-and-seek survival sim acts as a mesmerising spiritual successor to Ridley Scott's 1979 horror opus. Stalked by the relentless Xeno, HR Giger's ultimate movie monster hunts Ripley with all the determination of a slavering Terminator – its procedurally generated AI making it the ultimate survival horror menace. Six years on, our tattered nerves still haven't recovered.

Over the next few years horror games would take increasing stylistic and thematic chances. Psychological chiller Layers Of Fear managed to eke terror out of ink in 2016, as a disturbed painter tries to finish his masterpiece while his slowly decaying mind gives way to horrifying visions. SOMA served up underwater terror the likes rarely seen since a certain Spielberg shark movie put bathers off large bodies of H2O. Inspired by both BioShock and System Shock, its thoughtful tale of AI gone awry poses uneasy ethical questions wrapped up in a seriously creepy shell.

The likes of Friday The 13th: The Game and Dead By Daylight also proved scares could be sociable. These recent(ish) asymmetric multiplayer outings revel in the power fantasy of making one player an unstoppable movie monster, while the rest of the poor saps on the map run for their lives. We're betting you've now got Jason Voorhees' theme music stuck in your head. You're welcome.

More recently, Resident Evil turned things around with a terrifying first-person seventh instalment, and in 2019 the Resi 2 remake introduced Xbox players to the delightful horrors of the Raccoon City Police Department. Speaking of 2019, Man Of Medan proved to be a fine support act for RE2, with the story-driven nautical horror setting sail for dread. Too bad The Blair Witch Project frustrated more than it frightened. Good dog, though.

The history of horror on Xbox has been paved with chills, many a lost night's sleep, and maybe some poo. While there are plenty of petrifying sights in the rear view mirror, the future looks shockingly scary. This year alone GhostWire: Tokyo, Little Nightmares 2 and Remothered: Broken Porcelain all want to shred your wits. Not to mention a certain hulking Nemesis. With rebooted Resident Evil 3 leading the charge, the months ahead should be monstrous fun for horror hounds.