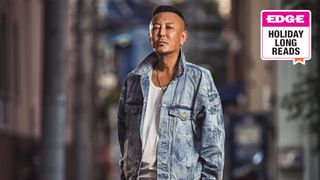 Toshihiro Nagoshi's career started in earnest in the formative days of the 3D era, just as Edge was first hitting shelves. And after being given his own Sega division, Amusement Vision, in the year 2000, he also became a columnist for Edge Magazine, sending over monthly musings on the state of play, or the challenges of running a studio – or, more often than not, his love of whisky.

He’s played a vital role in the evolution of Sega, working on the first games for the Model 1, 2 and 3 arcade boards, getting Shenmue over the line and partnering with Nintendo after his employer’s withdrawal from the hardware market, before launching the series that has endured for over a decade, and is still going strong. Here Nagoshi, these days Sega’s chief creative officer, reflects on a career spent defining the future of interactive entertainment.

It was Sega’s first project using 3D graphics. I was a designer, and I thought the graphics looked cheap, which was very stressful for me! But fun is about more than just the visuals, people were really happy with it, and I learned that having a bit of stress is good; it’s important not to be satisfied with what you’re working on. I was only making arcade games at the time, which was a big priority for Sega.

Also, Japan’s economy was good. So the company was investing heavily in arcades, and it wasn’t much of a problem if a game wasn’t successful. I was working under Yu Suzuki, the game director. We’d been working together a while by this point. He was a very energetic person and, well... a little childlike. He was full of curiosity, and when things didn’t go his way, he would get very angry. But I understood that those things were just a result of his energy. If you didn’t know him well, you might think he had a short temper.

We would do some basic study, and if he decided it was feasible, it’d become a project and we’d begin work on it. Virtua Racing is remembered for having multiple camera angles, which was something new at the time. That feature was only added towards the end of the project. These days we have planning documents. Without them, the team doesn’t know which direction to head in. But they’re only a guideline. If we find something interesting that’s not on the plan, we must have the courage to challenge ourselves and take a different path. It’s in these moments that we make games more fun.

I was a supervisor on the team at first. As the project progressed, as you know, it had become bigger and bigger, and I couldn’t put up with it any more. It was one of the turning points in my career. I talked to Yu Suzuki, as well as talking to my boss in the development division at that time, and said I would like to have my own division. And they made it happen for me. But we really could not see the end of Shenmue, and I was called by our CEO at the time. He said to me, ‘Please get this game finished’ [laughs]. So I was a producer and director for the final months of the project. I’d reviewed the whole project, looking at what kind of plan they had and the remaining workload. It took me more than a month to understand what was going on.

Subscribe to Edge Magazine in print or digital for more in-depth features, reviews and interviews about the future of interactive entertainment.

The CEO asked me how much time would be needed, and I told him six months. Myself, and the programmer and designer I most trusted, called the whole team and told them we had to finish the game in six months. We did it, but it was a tough and bitter project for me [laughs]. Suzuki-san also knew he had to finish the game soon, whatever the final result. He’s the kind of person that, if he wants to do more, cannot stop himself, so someone must be there to do it for him. Our CEO knew that I was the only person he would listen to. Hard as it was to be asked to do it, I knew why it had to be me [laughs]. There’s only one reason for why the project turned into such a panic. Suzuki had been creating arcade games for so long, and didn’t write planning documents. But for console games, you have to have a blueprint, and it was such a big project.

He had a policy that we should not decide how a game should be on paper before we started making it. But we have to have guidelines, otherwise there’s a risk that we overrun and fail as a company. Even if it was someone else’s game, I learned the importance of that balance once again. I still think it was an epoch-making game at the time. If there had been a line producer or someone who was good at managing things, I believe the outcome would have been different.

When Sega left the hardware business after Dreamcast, everyone was really disappointed, because we’d lost the war. But I was very pleased about it, because it gave me an opportunity to provide software for other hardware. I felt free. And if we were going to be making games for other people, I wanted to work with what I had previously thought of as our biggest competitor. I visited Nintendo, obtained information about GameCube at an early stage, and told them I wanted to develop a game for them. Super Monkey Ball was an arcade game before it was released for GameCube.

Around that time, as I said earlier, graphics technology was getting better and better. Development costs were also higher, which became a big issue within Sega. Around that time our CEO kept changing, and the newest one asked me why making games cost so much money. I told him we couldn’t do it any cheaper, but at the same time, I was quite upset about it. I decided to make a game with minimum resource, minimum time and minimum budget. It would be a game you would play with just a lever – no buttons. I just wanted to prove that it was possible.

Looking back, that’s no way to work [laughs]. But there are some huge fans of this game. When we gave up on making hardware, we knew the GameCube was coming, and when it would be launched. We didn’t think we had enough time to get a game ready for release day, but when I was asked if there was anything we could make, Super Monkey Ball came to mind. I think we had ten people on the team, maybe less. We made it just in time somehow.

I was interested in how Nintendo created games. I wanted to work as a sub-contractor [with Nintendo as publisher] for this purpose, so I could see what kind of workflows and techniques they used. That’s how the F-Zero project came about. Compared to us, in the big picture, we are similar. But in the finer details – their decision-making and timing – things are different, and I learned a lot from them. In short, it’s about objectivity. They value the consumer’s point of view tremendously.

And they are very, very thorough indeed. It’s hard to describe, but when I’d say about some part of the game, ‘It’s okay like this, isn’t it?’ they’d say, ‘Our company does not allow this kind of thing. Ever.’ I didn’t manage to change their minds about anything. Not even once. But that’s why Nintendo has such a solid brand, even after all these years. That is why we lost the hardware war. I really liked the Super Famicom game, and while we made a few proposals – Metroid, for instance, and others – I was most confident in making a driving game because of my experience in the genre, though I’d never made a sci-fi one.

When we were having those meetings with Nintendo to decide what to make, Miyamoto was involved. He was like a god to me then, and it’s the same today. If I was a musician who’d made a few hit records, he was The Beatles. Once the project was up and running he said to me, “You know how to do this. All you need to do is be confident, and just do it, without hesitation.”

I was really pleased about that. Once the project was up and running, he didn’t get involved too much. I was really motivated, and worked very hard. Even though we’d lost the war in the hardware market, I wanted Nintendo to see how great Sega was as a company. We made lots of characters and courses, and we did the best we could for the graphics using the best technology of the time.

Even though we’d tried really hard making games for Sega hardware, they never sold too well, but F-Zero sold over 1.5 million copies worldwide. We realised the only thing we needed to admit was that Sega did not have the ability to sell hardware [laughs]. That as a developer, we should not be sorry about losing the hardware business, or be worried about just being a software company – we did not need to be pessimistic at all.

It was a good opportunity for me as I was able to learn how Nintendo works, and as a software company it gave us our confidence back. After it was released, I got a call from Nintendo. They said they wanted to see all the source code for the game, and wanted me to explain how we’d made that game, in that timeframe and with that budget, in detail. They were wondering how we’d done it – they couldn’t figure it out. We were able to achieve something a lot higher than what Nintendo had expected.

Continue over to Page 2 for more from Toshihiro Nagoshi on his life and works, all the way through to his upcoming entry in the Yakuza franchise.