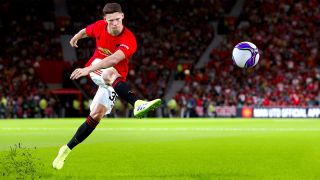 Farewell, then, Trad Brick Stadium. The PES staple is gone, replaced by a meticulously detailed recreation of Old Trafford, as part of a partnership of as-yet-undetermined length between Konami and the team series veterans have come to know as Man Red. The publisher euphemistically calls it "a year of significant change for both brands" – though it's obvious why such a deal would appeal for Konami given the size of United's global fanbase, even with the Theatre of Dreams having become something more like the Theatre of False Hopes in recent times. Perhaps, in fact, that's why a partnership is now more viable – Jonas Lygaard, Konami's senior director of brand and business development, refers to a "two-year journey" to ink the deal. Maybe José Mourinho was more of a FIFA man.

Regardless, at an event held at United's Carrington training complex, it's hard not to be impressed when first-teamers Scott McTominay, Victor Lindelöf and Diogo Dalot appear on stage next to holograms of their uncanny in-game likenesses. We see footage of a rig of cameras capturing their faces and bodies from a wide range of angles, while Lindelöf is just one player whose extensive arm tattoos have been rendered in remarkable detail: he seems quietly impressed at how well they've been recreated on his character model as it sways gently beside him.

McTominay, meanwhile, has been newly appointed as a PES brand ambassador, which means he'll be paid lots of money to pretend he doesn't play The Other Football Game – the sparky midfielder claims to be the one to beat in the changing room for video games of any kind, the most human part of an otherwise painfully stilted on-stage 'interview'. (No blame attached to the players; there's little difference from the usual PR-trained post-match chat.)

After a build-up of Sky Sports Super Sunday proportions, it's finally time to go hands-on with the game they're now calling eFootball PES 2020 – which doesn't feel any less clumsy than the first time we heard it. Though if at first it seemed like an attempt to get away from the Pro Evolution Soccer name, which no longer holds the same cachet as it did during its early PlayStation heyday, there are no signs that it's being retired just yet. When not called to give it its full title, the Konami reps still say 'PES', and McTominay refers to it as 'Pro Evo'. Good man.

He's on the title screen, too – at least in this build, which allows us to play as either United or a team of PES Legends. The latter come with a borderline psychotic setup, with those famous centre-backs Pavel Nedved and Patrick Vieira part of a defensive three, and Diego Maradona inexplicably left on the bench. It's even more baffling when you see him in action, since as much as anyone else he highlights the care Konami puts into distinguishing players, particularly the superstars of the game.

Maradona's close control and low centre of gravity makes it very hard to rob him of possession by fair means – and he has a habit of hurdling attempted fouls, too. At one stage we resort to Massing-v-Caniggia tactics to ensure he doesn't get into the penalty area, only for one David Beckham (the first of a series of United legends who'll appear in the game) to curl in a trademark free-kick. As Beckham wheels away, David De Gea frustratedly punches the ground with both fists in familiar fashion; later, he plucks a shot out of the air that seemed to be arrowing towards the top corner with the kind of commanding ease to which United fans have become accustomed.

PES has always been good at this stuff, of course, but this year those fine details are, well, finer. Some of that's down to the quality of the animation. Previous entries captured individual movements well, but they felt awkwardly stitched together; this year it appears they've been more effectively blended. If the joins are less noticeable, it occasionally seems to have an impact on response time – we're some way from the zippy arcade feel of PES 2013, though you can still pull off slick, one-touch passing moves in the middle of the park. That's partly because there's a little more space: pitch dimensions feel slightly larger, though that may be something to do with the new default camera. It moves along a slight curve for a more televisual framing, though it doesn't always fully keep up with play - on more than one occasion, we found ourselves inside our opponent's half without knowing if our wingers were free.

There's an increased physicality, too, with fouls packing a wince-inducing wallop – there's a brilliant moment where a cross thuds into Phil Jones' ample midriff, and he bends over as if winded, letting our opponent recover the ball. Referees are occasionally a touch whistle-happy, not least when we concede a penalty for a standing tackle that cleanly won possession. But elsewhere, as McTominay (who, as brand ambassador, would appear to have had his stats slightly inflated) we knock Totti off the ball with a good old-fashioned shoulder barge and the ref waves play on.

Tackling is fun, in other words – no invisible force fields around your opponent here – and while the AI is generally competent, they're capable of mistakes that mean you'll see plenty of possession. Whether that leads to more goals, however, will depend on how you acclimatise to shooting that offers less margin for error. Pressure from defenders makes miskicks all the more likely, which encourages you to work the space for more clear-cut openings – for which the new right-stick 'finesse dribbling' is ideal.

While two hours' play with two teams isn't enough to fully pinpoint potential tactical shortcomings, it's clear that low crosses from wide have been nerfed, while angled lofted through-balls seem slightly OP – though Marcus Rashford against a lumbering Vieira was always going to be a mismatch. Besides, as has happened in years past, some of this will be subject to change between now and the game's September release.

You'll be able to see for yourself soon enough. A demo is coming at the end of July, featuring 12 teams and, more significantly, the game's Edit Mode, letting you get ahead of the game with kit and line-up changes before launch day. It's an acknowledgement on Konami's part that if it can't compete with EA in licensing terms, it can at least rely on the game's biggest fans to pick up the slack. Whether the sport's biggest fanbase can get eFootball PES 2020 closer to its moneyed rival remains to be seen. Still, Konami will be hoping, as will United, that the changes it's made on and off the pitch will help it become a Theatre of Dreams once more.