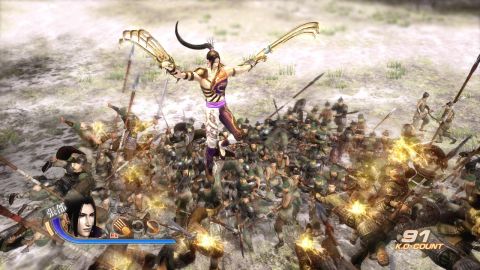 Once again, Tecmo KOEI pulls us back into the war torn lands of ancient China where all the men wear pretty silk dresses and all the women wear next to nothing (albeit, it’s probably so you can differentiate them from the men). And, to absolutely no one’s surprise, Dynasty Warriors 7 is basically Dynasty Warriors 6, which was essentially Dynasty Warriors 5 and... well, you get the idea. With ten years under its belt, brainless hacking and slashing is still the name of the game with this franchise. Hey, at least we can’t call them inconsistent, right?

First off, we’re not saying that sticking to your guns is a bad approach for a videogame franchise to take. We wouldn’t have series like God of War, Halo or Call of Duty if their developers decided to reinvent themselves for every sequel. If you have an awesome concept with solid gameplay mechanics to back it up, then more power to you. It’s just that Dynasty Warriors is not in that camp. The series relies on gameplay that’s about as solid as Lindsay Lohan’s acting career.

There are two game modes to choose from: Story Mode and Conquest Mode. Based upon Luo Guanzhong’s Romance of the Three Kingdoms, Story Mode is your basic single-player campaign and enables you to play through the faction campaigns of Wei, Wu, Shu and the new kingdom of Jin. Each segment can last anywhere from 8-12 hours and completing them unlocks droves of content ranging from Encyclopedic entries on historic battles to character art and biographies.

Employing a small change of pace from previous titles, DW 7 no longer allows you to select the officer or general you’d like to play as but instead tailors each mission to a specific character. Considering the character roster stands strong at 62, you won’t be spending too much time in any single person’s shoes.

Predictably, this variety in character doesn’t transfer over to the combat in the slightest. While you can choose whatever weapon you’d like for the character you’re currently shoehorned into playing as, the weapons system that DW 7 employs ensures that specific characters are only proficient with specific weapons. Likewise, the move sets for each weapon never change between characters, with the exception of a special EX Attack that characters can pull off with their favorite weapon (and certain characters share the same EX Attack). The only thing that’s truly unique to each character is their Musou Attack – a veritable martial arts atomic bomb that can clear out hundreds of enemies at a time.

Conquest Mode kind of functions like a “Story Mode Part II.” You can select any character that you unlocked from Story Mode to then move about a hexagon-style board engaging in random battles with specific objectives. You’re rewarded with unique weapons and character-specific storylines that we can only assume weren’t considered important enough for the main Story Mode. Like Story Mode, Conquest Mode is an incredibly lengthy endeavor that can easily suck up several hours of your time. You can also engage in online co-op (which we would love to talk about, but found it impossible to connect to anybody).

If DW 7 has got one thing going for it, it’s the sheer amount of content. The problem with this is that any gamer who isn’t already a self-proclaimed Dynasty Warriors super-fan will just become bogged down by the fact that you simply do the same damn thing over and over and over again. Whether you’re annihilating 1,000 hapless peasant-soldiers or escorting some mentally deficient NPC who refuses to stop dying, no battle ever feels different from another. Challenge never really enters the equation, either. Over 90% of the enemies you face don’t even friggin’ fight back, making the experience feel less like an epic battle so much as a systematic genocide. Sure, you’ll face enemy officers who will actually take a swing at you, but this mostly boils down to you mashing on the attack button a little longer than normal to take the enemy out.

Graphically, the game looks dated at best and downright ugly at worst. Character models look stiff and goofy, textures get extremely muddy up close and the level environments are bland and barren. The game looks like an HD remake of an older Dynasty Warriors game, if that makes any sense.

The story could’ve been engaging if it weren’t for the incredibly awkward voice work and the slew of poor comedy segments that just spring up out of nowhere. Every time we found ourselves getting even slightly drawn in to the world, a character would say or do something so stupidly out of place that we’d get kicked right back out again. It’s a shame as there are a few genuinely engaging moments.

Above: It’s easy to be a badass when no one fights back

If you’re a fan of this series, there’s plenty of content to keep you busy till all hours of the morning. If not, it’s best that you just keep your distance. The Dynasty Warriors franchise is a beast of inveterate laziness. The gameplay is tired and, while the story and characters could be intriguing, the presentation is too bland and wonky to draw in gamers who are new to the series.