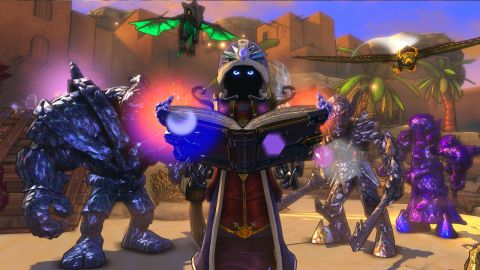 Dungeon Defenders adds a new twist to tower defense with a mishmash of RPG, action, and tower defense gameplay elements making for a worthwhile investment from the Xbox Live Marketplace. There is plenty of content to keep players busy – whether it be working their way through the campaign and tackling challenges. It’s not with its setbacks, though, with the less-than-exciting combat system and loot that feels more like a chore than a reward system.

Tower defense sits at the heart of Dungeon Defenders. The player takes on the role of a Squire, Apprentice, Huntress, or Monk using traps, barricades and magic to defend the castle from an army of evil creatures these would-be child heroes have mistakenly unleashed. Each level plays out in an arena with several entry points for enemies to spawn from. It is the player’s job to analyze the level map and exploit choke points with barricades and traps to prevent enemies from destroying the Eternia crystal at the center of the map. The game is played from the third-person perspective, requiring characters to traverse the map to set up towers while battling enemies along the way.

Enemies are varied and numerous, requiring different strategies to counter their abilities. Hulking orcs will devastate defenses, mages heal enemy units, and suicidal kobolds rush towers with dynamite strapped to their backs. Minibosses in the form of giant ogres made us rethink our tower placement in several situations and the major bosses present the biggest challenges in the game.

Dungeon Defenders has all of the workings of the standard RPG fused into the tower defense gameplay. Player classes have unique abilities, armor, weapon types, and towers. Killing enemies, conquering campaign levels, and completing challenges earns experience which unlocks abilities and towers as well as more powerful items. Character and tower attributes can be upgraded with points earned upon leveling through a somewhat confusing menu system – improving maximum health, damage, casting speed, and movement speed, among others.

All of these features add a great deal of replayability to the game – as does the multiplayer. Once we worked through the levels and beefed up one character, we wanted to level up a complementary character to make proper use of the character swap feature and get the upper hand on some of the more difficult challenges. Setting up spiked barricades as the Squire and switching to the Apprentice to place projectile throwing magic towers makes for a devastating combination. It feels great to level up a character, unlock the advanced towers, and add them to your defense strategy. Playing with a friend or three adds a new dimension in strategy as we were required to actively communicate in tower placement, mana distribution, and repair efforts to hold back the onslaught. The real fun comes in joining a party of friends to tackle the hardest challenges and picking up epic loot.

Unfortunately the action aspect of gameplay falls short. The combat became stale very quickly. Although the characters have special abilities like the Squire’s spin attack or the Huntress’ invisibility, we rarely found a need to use them. Enemies were easily dispatched with well-placed towers and planning trap layouts and developing strategies was fun, but jumping into the fray was not – especially with the melee characters. Combat essentially involves mashing on the one attack button and maybe throwing in a special ability for kicks. Neither feels particularly effective and leaves the combat feeling shallow.

Another problem we had with Dungeon Defenders was the loot. Items can be found in treasure chests and is also dropped by enemies. Picking up epic new armor or weapons and equipping them to benefit from their attribute bonuses is a strong motivator to up the difficulty on the challenges, but the problem lies in having to sort through piles and piles of useless loot at the end of a wave. Checking each dropped item’s stats to compare to our equipped set slowed the game down considerably since all of the loot is spread across the map and it takes at least a few seconds to inspect an item. While we could just run through the map and throw everything into our item box to review later, having fewer, more useful drops would have kept loot gathering from becoming such a chore.

Dungeon Defenders is a worthwhile addition to your game library with plenty of content for the price. Although the combat falls short, the tower defense gameplay, RPG elements, and the challenging game modes will have fans of tower defense delighted.