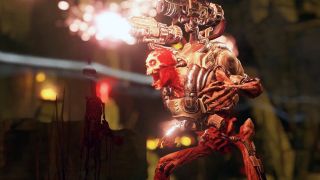 Doom is rated M, which indicates it’s meant for a mature audience. The multiple ways in which you exsanguinate a robust variety of demons is a perfectly fair reason to slap an M on the game box, but what truly indicates that Doom is a game for grownups is how much it respects your time. Every rewarding aspect of the game - the campaign, the secrets, the trophies - is flexible enough to let you get the most out of your experience regardless of your schedule or attention span. Doom, unlike so many other titles, understands that it is there for you and not the other way around.

Vote for Doom in the Best Visual Design, Best Audio, Best Gaming Moment, PC Game of the Year, and Game of the Year categories at the upcoming Golden Joystick Awards 2016 and claim three games for $1 / £1 for taking part.

Doom’s campaign is a glorious highlight reel of rust-hued violence, with gigantic levels that seem to stretch on for miles and yet are meticulously crafted to keep the action flowing while also hiding numerous secrets. It’s a massive playground where full exploration of a single map can take hours at a stretch but brilliantly doesn’t have to. If you don’t feel like muscling your way through a Rune Trial in the middle of a level, that’s ok - you can select it from the menu later. No need to track it down again, because once you find it, it stays found so you can get to it when you’re in the mood to face its particular kind of timed challenge.

Each level has tons of hidden goodies to find, like caches of weapons, Doomguy action figures (now with fistbump action!), and old-school Doom maps. If you’ve got the time and determination, you can find all of them the first time you run through a level, but if you don’t, that’s fine, too. You’re not punished for going back and doing cleanup later; indeed, you can essentially New Game + while you’re still playing because you can revisit previous levels while keeping all your current stat and weapon upgrades. You can even upgrade one of your skills to the point that it’ll highlight specific secrets on your map for you. It’s not a cheat - you’ll still have to find some things the old-fashioned way and even the ones you can see are still damn tricky to locate - just a nudge. I want you to have fun, says Doom, so I’ll meet you halfway.

Doom’s onslaught of combat is brutally challenging, especially as the story is winding up. Its boss fights, in particular, will have you contemplating many of your life choices. Once upon a time you might’ve been willing and able to devote an entire evening to besting a battle that’s proving overly thorny, but if that’s no longer the case, Doom lets you slide the difficulty down on the spot. You don’t even have to restart the level; you can decide on the fly that fuck it, you’ve had enough and you just want to move on, already. There’s no achievement calling you a baby for switching the difficulty, and you don’t lose your chance at a trophy for finishing the game. In fact, only three of Doom’s trophies require you to either play on a hard setting or complete something in a single run-through. This is your game. There is no “right” way to play it, says Doom, except what’s right for you.

Which means you’re free to ignore everything I’ve described. If you want to pound your head against the Cyberdemon until he’s dead dead dead, go for it. If you want to find every last secret without so much as a sly glance pointing you in the right direction, you can. As easily as you can turn the difficulty down, you can also turn it up.

Doom is your game, for you to enjoy on your terms. It’s a reminder that games tend to treat us like we are boundless wells of time and attention, and of course we’ll be happy to put everything on hold for as long as it takes to drain every last drop of entertainment from them. Once you reach a certain point in your life, however much you want to have that kind of relationship with games, you realistically can’t. Stuff gets in the way. Good stuff. Stuff that’s every bit as enjoyable or important as the games want to be. Doom certainly has some advantages when it comes to being flexible, given that it’s not bogged down with a lot of plot and it’s easy to pick up where you left off no matter how long it’s been between play sessions. But beyond that simplicity, it also wants to make sure you get the most out of your time with it, even if that time is just the hour you get to yourself after you put the kids to bed.