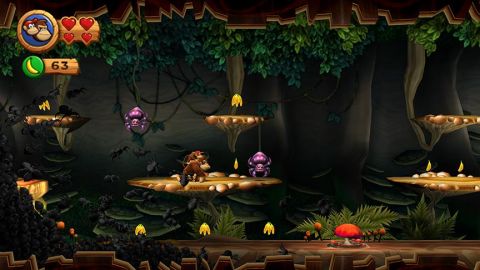 The original DKC marked the first appearance of Diddy and Cranky Kong (among other, more forgettable characters). Both are present in DKC Returns, but in an oddly diminished capacity. Diddy, for instance, is always on DK’s back. When you’re hit, he leaves, and you play as DK solo. Originally you’d actually switch to Diddy, but now it’s all DK. We’re not torn up about it, as Diddy is extremely useful on DK’s back, thanks to his hovering jet pack ability that lets you alter jumps in mid-air for a last-second save. However, this ability is so useful and ultimately crucial to certain areas, that it makes playing as solo DK twice as hard and half as fun.

Above: Who would’ve thought Diddy would be so indispensible?

The other option is to grab a friend and play some co-op, in which case player two handles Diddy directly. The catch is that you’ll really want to use that hover jump, which means Diddy will sit on DK, immobile and only able to fire a peanut gun at enemies. Not how we’d want to spend our two-player time.

Then there’s Cranky, who used to complain about how good games used to be “in his day,” and how today’s newfangled 16-bit machines were no good. He’s still here, still in a rocking chair and still full of complaints, but they’re extremely lame, groan worth jokes that never elicit a laugh.

Above: The living end

On the other hand, Retro did a fantastic job paying homage to the brilliant soundtrack first created by David Wise in 1994. There are tons of retro tracks taken from the first DKC, so if you remember that OST well (andso many of us do), then you’re in for a treat.

New Super Mario Bros Wii?Yes. Even though we’ve spent a good deal of time complaining about the difficulty, we still preferhaving a hard timeto the training-wheels gameplay of New SMB Wii. Other than a few levels near the end, we never once felt challenged. Furthermore, the vibrant world of DKC Returns completely outclasses the comparatively sparse NSMBW, and at least the bosses of DKCR aren't complete wastes of time.

Kirby’s Epic Yarn?No, though this is kind of a toss-up. Epic Yarn definitely holds your hand (you can’t even die), but the amount of creativity, infectious charm and easygoing gameplay outweighs the lack of a hardcore angle. Conversely, DKCR will hand you your ass and then follow it up with a pain in the ass boss, so which one is "better" is probably dependent on your mood.

Sonic 4: Episode I?Yes, in this reviewer’s eyes. Both are valiant throwbacks to classic ‘90s titles, yet both suffer from misremembering what made their originals such mainstream successes. If I personally had to pick a favorite, it’d be DKCR for having a few fewer cheap deaths and (comparatively) much better boss fights. And even though Sonic 4 isn’t “done,” we can assume Episode II won’t be drastically different. This also depends on your childhood allegiances - did you go Sega or Nintendo?