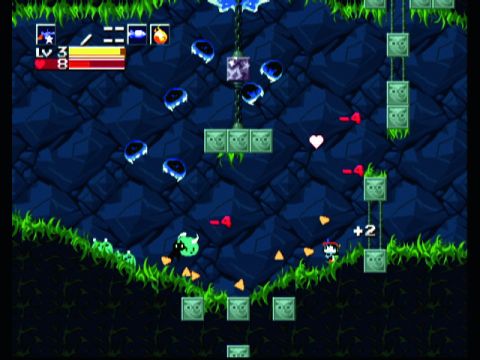 Cave Story is one of those heartwarming industry success sagas that puts a smile on everyone’s face: a single programmer’s multi-year labor of love that has turned into one of the most internationally beloved independent games of all time. After a successful WiiWare remake, Cave Story now makes its DSi debut.

For those unfamiliar with Cave Story, the game resembles Metroid and the more recent GBA/DS Castlevania games in structure. You start the game as an amnesiac boy in a strange, hazard-filled underground cavern, without even a weapon for defense. As you progress, you earn an arsenal of tools and weaponry, as well as uncover the secrets behind your existence and the cave you’ve awoken in. While Cave Story’s visuals have a clean, cartoonlike look, the underlying story is rather dark and somber – and surprisingly strong for a game of this sort.

Cave Story’s world is chock-full of everything that makes an action/adventure game great: memorable locales, challenging obstacles and puzzles, and some very cool boss battles (including some skill-testing multi-stage boss gauntlets). The controls are precise and easy to learn, and the variety of weapons you can obtain deliver multiple, strategic options for combating foes. There are even multiple endings to the game – though getting the happiest resolution to game’s conflict is an exceptionally tough task unless you are well aware of what you’re doing ahead of time.

Compared to the Wii version, however, Cave Story DSi is a bit lacking. Graphically and music-wise, the game is closer to the original PC edition – the updated visuals and music options of the Wii version are nowhere to be seen, nor is the special Curly Story mode (where you play as the game’s female companion). There are still some enhancements over the original, however: a difficulty select is available from the outset, a jukebox is available to listen to the game’s music, and a special Time Attack mode opens after you get the best ending. Considering the copious extras lavished on the WiiWare version, the comparative lack of enhancements to the DSiWare rendition is a considerable disappointment.

As it stands, Cave Story is a fantastic action/adventure title on any platform, and its newfound portability on the DSi is a huge boon. The Cave Story die-hards will no doubt download every edition that becomes available, but if you haven’t played Cave Story before, you’ll want to weigh your options. Are bonus bells and whistles worth more to you than portability? If so, go for the WiiWare version. If you want a charming, challenging adventure on the go, the DSiWare adaptation is your best bet. No matter how you play it, though, this is one story worth hearing.