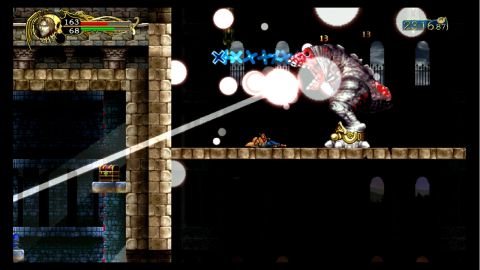 Reviewing Harmony of Despair has been quite a challenging experience. As fans of the 2D Castlevania games, the idea of a gorgeously high-def sequel packed with the coolest heroes and villains from the past several games sounded like a dream come true. But when it was revealed to be a six-player grindfest that tasks you with entering the same levels over and over again in a near-futile attempt to beat a boss a billion times stronger than you, the interest level understandably dipped.

But after several hours spent in co-op play, it’s fair to say that Despair is actually quite enjoyable in groups, and a concept that once seemed so contrary to the essence of Castlevania turns out to be a welcome shake-up of a series that’s been treading water for years.

As we hinted at earlier, the game is built around six massive maps that you (and ideally one or more friends) enter with only basic equipment. The goal is to navigate the immense area until you find and defeat the boss, who’s likely so powerful he’ll annihilate your party on the first outing. But, everything you collect during the trip, from money to be spent in the store to weapons and armorfound in treasure chests, is retained for the next attempt. Thus begins the grind – repeatedly re-entering the same levels to gain money for better equipment, more random treasure chestsand to see what relatively valuable item drop the boss may have.

There’s another wrinkle – each of the game’s playable characters has specific skills that are bolstered with repeated use, so the more you stick with one character and weapon layout, the stronger you’ll become over time. Longtime Castlevania fans will recognize the heroes and their powers: Soma Cruz steals monsters’ souls and uses them in battle (Dawn of Sorrow); Alucard gains various offensive and defensive spells (Symphony of the Night); Shanoa absorbs glyph magic from certain enemies and can cling to metal objects (Order of Ecclesia); Jonathon has the Vampire Killer whip and can power up the classic Castlevania weapons, such as dagger, cross and axe (Portrait of Ruin); And Charlotte, much like Shanoa, absorbs magic from particular enemies with her spell book (also Portrait of Ruin).

The only downside is the way in which you track each fighter’s progress – the menus aren’t overly helpful, and the game does very little to teach you how to read its various stats and progress meters.

Above: The zoomed-out view lets you see the whole map, plus every enemy, treasure chest and even the boss

The good news is that all the loot you gather is shared among everyone on the map. So if Shanoa opens a chest six floors up, she gets something suited for her while Alucard receives some type of goody as well. Soma Cruz is especially aided by this, as his power grows with each new soul collected, and enemies killed by your friends count towards that total. After a few trips through, you’ll all be sufficiently powered-up, able to tackle the boss and move on to the next map – and likely get your ass handed to you all over again.

Furthermore, playing in groups gives you faster and better access to the full map. Certain levers open doors or douse obtrusive flames that are several rooms away, which leads to a lot of backtracking. With two or three people in tow, one can flip the switch, another can wait by the door and move through, and the third can focus on gathering Water of Life, a special pickup that lets you revive a fallen friend. Players four and five can start clearing the boss area of additional enemies or go scouring for chests. So, with friends, you’re able to access more of the map, gain levels faster and accumulate money at an accelerated rate, plus orchestrate plans to tackle the crushingly tough bosses in record time. Without a doubt, that’s the way the play, but there are still issues that bring it all down.