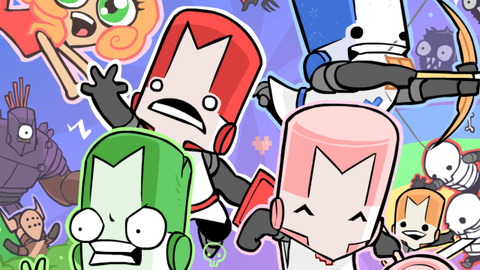 Knock off a point if you're planning on playing solo, but get a few friends together and you'll be in for one hell of a Knight. Sorry.

“Beauty is is the eye of the beholder,” is something handsome stallions have been saying to ugly people for centuries. It's also, to a certain extent, true. Take a passing glance at Castle Crashers on an Xbox One, the same machine that runs beauties like Arkham Knight and The Witcher 3, and you might be tempted to rip out your eyes in disgust. Or the Xbox One power cable. Whichever's nearer.

Sit down and play Castle Crashers however, and it's hard not to be won over by the cheap and cheerful, hand-drawn art style. A colourful, charming look, especially in motion, that goes a long way to hiding the old-fashioned gameplay underneath.

A 2.5D hack and slasher reminiscent of Golden Axe and Every Other Arcade Machine In the Nineties. Armed with a variety of swords, maces, lobsters, umbrellas, axes, lollipops and so on, you have a light attack, a heavy attack, a magic attack that relies on a recharging mana bar (never actually called a mana bar, but come on. It's a mana bar. Surely this isn't your first rodeo?). There are a few combos to be unlocked and different weapons have slight differences in stats, but Crashers rarely gets more complicated than 'whack bads in face till dead'.

Not necessarily a bad thing. What Castle Crashers lacks in depth, it makes up for in accessibility. Up to four knights can crash castles together, both online and offline. It's a game clearly designed for four musketeers, rather than anyone hoping to play the lone hero. Played as a four, it's much easier – swarms of soldiers are less likely to overwhelm when you have up to three friends helping slice up the crowd.

Alone though, the repetitive nature of the combat is harder to ignore. Defeat three enemies. Move to the right of the screen. Defeat four enemies. Move to the right of the screen. Defeat loneliness by making three friends so you can play properly. It's not above the occasional difficulty spike either. Chucking a horde designed for multiple players at you feels less like a challenge, more like a punishment for going solo. Perhaps it would've been less noticeable if the game didn’t repeat foes so often. Seeing a new enemy is great the first time (monsters that cry and wave surrender flags when you defeat them, a hungry bib-wearing bug with a knife and fork ready for eating you, pointy-eared fire demons straight out of the cutest corner of hell) but they can wear thin through overuse.

Which is why Castle Crashers highlights are its imaginative boss fights. They boast the games best, silliest ideas (a painter who draws new monsters, a killer ear of corn, a flame-spitting head that's teamed up with a sock puppet) but doesn't milk them dry. The games second half is a lot more boss-heavy, and stronger for it – it feels like these bouts are where the best ideas went.

Because even though the old-fashioned gameplay might predate the big bang, it's not an unimaginative game. There's a surprise volleyball game, animals that react most indignantly to being scared and each rescued princess is celebrated with an enthusiastic make out session (you don't get that in Mario). Played in tandem with others, it's more fun and faster paced, meaning you get to the good stuff faster. But even at its most repetitive, you're rarely far from something that'll make you smile.

New for Xbox One is Back Off Barbarian. A mini-game where you avoid enemies by hitting the right coloured button to jump between floor tiles. A fun little diversion, but nothing worth upgrading from the Xbox 360 for. But newcomers should definitely seek it out. It's not perfect and stretches its best ideas a little thin, but The Behemoth still gets what makes an offline multiplayer game work. In a time where local multiplayer gets more and more sidelined, Castle Crashers is a rare standout.

Knock off a point if you're planning on playing solo, but get a few friends together and you'll be in for one hell of a Knight. Sorry.