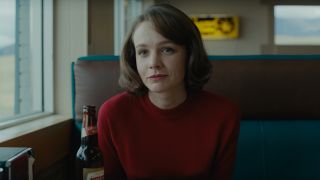 Whether playing the twin Sundays of There Will Be Blood, or Little Miss Sunshine’s silent Nietzsche fanboy, Paul Dano specialises in unassumingly brilliant supporting performances studied in subsurface emotion and precise restraint. He brings these exacting qualities to his directorial debut Wildlife, a quietly devastating coming of age movie dipped in poison.

Adapted from Richard Ford’s ‘91 novel and set in 1960 Montana, Ed Oxenbould stars as Joe, who’s rather quaintly introduced as “Joe Brinson” by his loving parents, Jerry (Jake Gyllenhaal) and Jeanette (Carey Mulligan), wherever he goes. When Jerry loses his job at the golf course for being ‘too friendly’ (read: gambling with the customers) the cracks start to show in a home built on shaky foundations. Wallowing in a state of listless, low-level anger – a road you immediately feel he’s walked before – Jerry is too proud to take a “teenager’s job” packing bags at the supermarket, instead fixating on the nearby wildfires, and the crews sent out to dampen them for $1/hour.

Jerry has “beautiful intentions” says Jeanette, which is pointedly not meant as a complement. Living in a rented bungalow, and with just $80 in the bank, Jeanette takes a job teaching adults how to swim at the local YMCA. But when Jerry heads out of town to fight fires for an indeterminate period of time, effectively walking out on his family, Jeanette, a dedicated mother and wife, changes literally overnight. Abandoned in a town she never wanted to move to in the first place, she prioritises self-preservation and the pursuit of her own unfulfilled promise, re-adopting the free-spirited, sexually liberated persona of her teenage years, and encouraging the advances of a local businessman.

All this is seen from the perspective of 14-year-old Joe, a somewhat precocious teen who has a front row seat to his parents’ crumbling marriage, and is powerless to intervene. In one excruciatingly sad sequence, Jeanette inexplicably brings Joe to the scene of the affair for dinner, which Joe must patiently sit through while watching his own mother flirt openly with her new man, pitifully mentioning his absent father at every opportunity. In much the same way Woody Allen would occasionally cast proxy Woody Allen types, Oxenbould’s Joe is a Paul Dano character minus a Paul Dano performance: understated, impassive, but emotionally transparent. He’s one to watch.

More will be expected of Gyllenhaal and Mulligan, two of the finest actors of their generation, and the pair do not disappoint. Gyllenhaal has the lesser role, disappearing from screen for much of the mid-section. But far from a cliched alpha male, he’s a loving husband in touch with his emotions (at one point telling his son its OK for men to love each other, an openness which may be considered progressive at the time), but falls foul of an obsessive requirement to provide for his family. His haggard hunch says it all. But it's Mulligan who truly dazzles as a feminist born in the wrong decade. To its credit, the film never judges Jeanette for her decision to “step out” on Jerry, instead we’re invited to empathise with her desperate need for independence, Mulligan note perfect as both loving mother and battle-hardened singleton.

Possessing a veteran’s eye for compelling compositions, and imbuing the film with a remarkable sense of time and place, Dano makes a major impression during his first stint behind the camera. His gift for directing actors seems effortless, but Dano deserves kudos for the performances he draws out of his cast. Happily, he’s working from solid source material, not just Ford’s novel, but the script, co-written by Dano and his real life partner Zoe Kazan. They’ve long been two of the most exciting voices in front of the camera, now they’re a force to be reckoned with behind the scenes as well.

Celebrate the start of Cannes Film Festival 2018 by watching the best Cannes movies of all time.