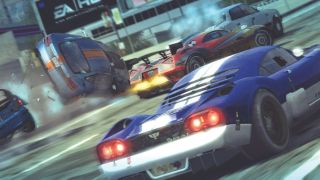 Burnout Paradise Remastered is out now on PS4 and Xbox One, so we're taking a look back at the original racer 10 years on.

Burnout Paradise was the first game I ever lovingly shoved into my first console's disc slot. And in many ways, Burnout Paradise and I are actually very similar. We’re both handsome, challenging, possess bizarre tastes in music, occasionally crash, get very frustrating to interact with and are terrible in bed. Actually, I quite enjoy playing Burnout Paradise in bed. I guess we’re not very similar at all then.

Nevertheless! Taking the opportunity on the anniversary of its release, I couldn’t wait to drive back into Criterion’s open-world. It makes a delightful first impression, too, with the opening bars of Guns N’ Roses’ Paradise City welcoming you in, promising a racing game that prioritises high-speed fun and destructive action. I get behind the wheel, slam down the accelerator, marvel at how nice Paradise City still looks and hum happily along. The handling on the cars, the thrill of hitting the boost and satisfaction of crunching another vehicle off the road still feels wonderful.

But Guns N’ Roses is almost too perfect a band to open with. Because just like waiting two hours for a fat Axl Rose to bother getting on stage and hopefully play nothing from Chinese Democracy, the full Burnout Paradise experience can be disappointing. Burnouts 1–4 had great split-screen multiplayer – gone here. DJ Atomika, the nails on a chalkboard of video game narrators, never seems to shut up, and sometimes even pauses the game to talk over it. As if that isn’t sinful enough, Girlfriend by Avril Lavigne is on the soundtrack.

Other flaws are less immediately irritating, but eventually sour the overall experience. The titular city looks gorgeous during the day, but gets tough to navigate at night. It’s even worse whenever the weather turns misty. Suddenly a game all about preparing for corners and keeping an eye out for shortcuts is set in a city drowning in fog. This is presumably why Konami isn’t making Silent Hill Kart. (At time of writing.)

The city is full of opportunities to unlock new cars but there’s no quick select option or fast travel. You have to search the city yourself, ‘helped’ by a mini-map so cramped you’ll need a 50-inch TV and designated cartographer handy to get much out of it. This seems like a (semi) deliberate move to get you to learn the layout of the city. After all, having to drive repeatedly over its turf subtly trains you, reinforcing the best routes.

And it works! After an hour of ‘this-ain’t-as-good-as-I-remember-you’re-an-idiot-Tom-of-the-past’ grumbling, I feel old haunts and tactics bleeding back into my internal sat-nav. I start a stunt run, where you have to score thousands of points through ramp leaps, smashing billboards, drifts and barrel rolls. I struggle, until I remember to make a beeline for the bridge next to the Lone Stallion Ranch, which has three consecutive ramps and billboards begging for my car to be smashed through them.

I start a race to the Country Club and then ignore the suggested route in favour of one I’ve made up, because I knew it would get me there quicker if executed perfectly. (Burnout Paradise’s often frustrating lack of guidance sings in moments like these.) Later I start a race to the Crystal Summit observatory and remember to cancel all my plans for the afternoon because it takes about three bloody years to get there. It’s all worth it though, for the brilliant drifting opportunities. The racing, once the difficulty ramps up, still holds up today, even if some odd design decisions don’t.

But I can forgive inane narrators and misty streets when the game introduced so many ideas we take for granted now. An open-world driving game sounded ridiculous in 2008. Now it’s the standard. Playing online used to involve watching a menu screen until the race started. Criterion envisioned a model where joining an online game was all of three D-pad taps away. Suddenly you’re in the same spot but now there are up to seven other players zooming around to take you down, all without breaking the action.

Going online also makes every individual road of Paradise City a competition. Get the best time on a road and you’ll earn yourself a silver number plate. But ‘best times’ belong in more serious, boring driving games. The real mark of Burnout brilliance is getting the best ‘Showtime’. Squeezing both of the triggers simultaneously turns your car into essentially a sentient wrecking ball, one you can bounce along the road, destroying as many neighbouring vehicles as possible.

Each car you smash pours a few thousand more dollars onto your score and smashing a bus earns you a score multiplier. As someone who once had to take a bus to work, I wholeheartedly support Burnout Paradise’s message of contempt for the smelliest, least reliable, most crazy person-stuffed form of public transport. Each car you hit injects you with more boost and you keep smashing your way down the roads until you run out. Get good and you’ll be able to bounce your way across the entire city in no time.

Get the best time and showtime on a road and you’ll ‘rule’ it, until someone beats your scores. At first I try ruling as many roads as possible. It’s fun, but somewhat isolating for a multiplayer experience. Hundreds of completable challenges were more up my alley. These range from the straightforward (boost for more than 60 seconds!) to the silly (everyone barrel-roll over each other!). I enjoy ticking them off. But as a fan of this series since my first taste of Road Rage in Burnout 3, something felt odd. Was Burnout all about camaraderie and working together now?

Then, on the way to another challenge, one of the other players takes me down. The game suddenly informs me that this monster is now my new ‘rival’. Oh, it is on. The challenge is forgotten. All I care about is taking down Judas McTraitorchops (real Gamertag hidden to protect his identity), the scum who’d HUMILIATED me in front of the entire internet.

I bash through other, weaker cars, determined to right this injustice. I slam down the accelerator and the boost, refusing to let up until the body of my nemesis’ car is scrap. I even start rehearsing his eulogy and practising how I’d boot his vehicular corpse into one of those machines that turns cars into cubes. I’ve never hated someone more in my entire life. Not since some other rando had beaten me at Rocket League about 20 minutes earlier, anyway.

That’s Burnout Paradise at its best. It’s a great many positions away from perfect but its innovations were plundered by other developers to great effect. Driver: San Francisco would take the open-world racing game and give it a crazy plot, with the best script to ever feature in a driving game (that’s barely a compliment, so I’ll be more explicit – Driver: San Francisco is one of the best-written games I’ve ever played). Sometimes it just takes one magical mess of a game to bring innovation to a stale genre, laying the groundwork for other developers to build upon. If there’s one thing I learnt, it’s that the next innovative game is never too far away.

The original version of this article appeared in Xbox: The Official Magazine. For more great Xbox coverage, you can subscribe here.