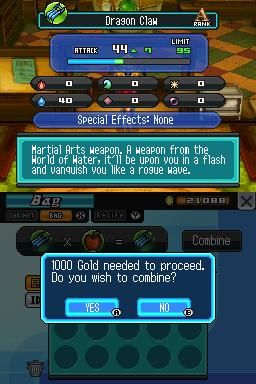 For those folks unfamiliar with the Blue Dragon series, it represents Microsoft's best attempt at creating a memorable Japanese-style RPG series to compete with the Final Fantasys of the world. Traditional gameplay, familiar character tropes, "save-the-world-from-evil" plotting, and a lot of almost anime-style, super-deformed graphics signal to the player that he or she is in for a particular type of gameplay in a particular type of game world.

Sure, it's all been done before, but that doesn't mean it's not fun, right? Hell, some people really like tradition, after all. And in its latest iteration for DS, Awakened Shadow, the Blue Dragon series cleaves to the traditions of its forebears pretty strictly - which means it's going to appeal primarily to traditionalist gamers. Gameplay is similar to just about any action-RPG you've played: you and your party of Blue Dragon-series standbys (unlike previous games in the series you get to create a custom character this time around) harrow a variety of dungeons and smack monsters in the grill with the stylus. Everything is real-time, so you don't have to worry about combat-loading screens, although the way the game is set up, the action happens on the lower DS screen while all your stats (including vital info like remaining life) is up top, which makes it hard to keep your characters healthy and fight at the same time.

But this is a minor foible; when it comes to staring at screens, by far Awakened Shadow's biggest issue is the amount of time you'll have to do it when you're not actually playing the dang game. Cutscenes seem almost limitless in frequency and duration, but offer little in the way of stuff that gamers will find interesting.

On the plus side, when you are actually playing the game, you'll be treated to a highly polished design: responsive and well laid-out controls, enjoyable and varied locations and enemies, and tons of customization options for your character. There's even a multiplayer mode – rare for an action-RPG – that allows you and up to three buddies to fight through the game's bosses (as well as some special, secret monsters) for extra loot that you can use in the main storyline. This is a welcome addition that offers at least some replay value; you don't have to chuck the cartridge on eBay as soon as you watch the ending cutscenes.

Since Awakened Shadow is so traditional, and since it explicitly continues the, er, continuity of the Blue Dragon series, its biggest audience is going to be people who are already fans. That said, there's no reason why any J-RPG fans, or those with a particular penchant for blocky cutscenes, won't feel their 30 bucks was well spent on Awakened Shadow.