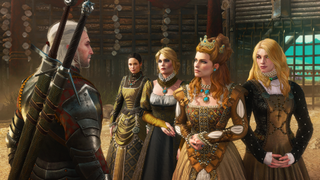 A witcher's work is never done, at least, when CD Projekt Red puts out another 30-hour long expansion to the Wild Hunt's already massive adventure, it can feel like Geralt's adventures will go on forever. But alas, the upcoming Blood and Wine DLC will be the last full-blown expansion for The Witcher 3: The Wild Hunt. The developers not only add a new story sequence for players to meet quirky characters, hunt mysterious beasts, and explore entirely new wide-open spaces, but also give them plenty of reasons to stick around in Geralt's monster-infested world.

Geralt's new adventure starts like any other: you take a witcher contract. Finding a notice on a job board will lead you to a meeting with a pair of knights in shining armor, but that isn't just a physical description of your new employers. These guys aren't the typical blathering, pimple-faced fiends you usually run into; instead they fit the personalities of an armored hero from a fairy tale. They constantly speak of bravery and honor with romantic, flowery turns-of-phrase - which Geralt loves to point out and make fun of, of course. The meeting leads to the DLC's new location and the knights' home, Toussaint, whose the prim and proper exterior doesn’t much feel like it belongs in the Witcher 3's world - until you start to explore and unravel the DLC's narrative mystery.

There's been a string of deaths by the hands (or claws) of a mysterious monster, and the Duchess of Toussaint (who seems to have a thing for the White Wolf) calls on Geralt to investigate. The mission proceeds as any Witcher 3 quest would, as you meet new characters, investigate crime scenes, and cut down anyone in your way. I won't get into story spoilers here but the quest has some fascinating twists and turns pretty early on with the drama and mystery of the story being complemented by several incredibly challenging boss battles within the first few hours. Despite the typical rummaging through victims’ guts looking for clues, Blood and Wine feels a bit more lighthearted than the rest of The Witcher 3, especially when it comes to Geralt's real world grit clashing with the fantasy land mentality of Toussaint.

Once you get through the Blood and Wine storyline, it looks like there will still be plenty for you to do - and some of it doesn't involve you roaming the countryside killing monsters. During the quest, Geralt earns the deed to his very own vineyard, which you can to customize as you like. If you've been looking to for a place to spend your piles of gold, this is going to be it. The vineyard starts off as a run down fixer-upper in need of a bit of a spit shine. If you have the funds, you can pay a contractor to repair it for you, giving you several options for increasingly posh furniture settings. Your new home also gives you a place to display all of the pieces of armor and weapons you've collected. Swords can be mounted on walls, armor can be placed on stands, and you can even collect and place paintings in rooms for added interior personality. Your vineyard can act as a home base of sorts, giving you stations to craft armor and sharpen your weapons, but it mostly feels like an elaborate trophy case for you to fill with the relics of your Witcher 3 adventures.

Blood and Wine also makes Geralt more customizable, adding an armor dye mechanic that allows you to change the color of specific pieces of armor. There are also new witcher armor sets that provide a variety of bonuses when you have hunted down and equipped every piece, and new Mutations beef up your current supernatural powers. You can add a freezing element to your Aard sign (force push) and freeze enemies solid, recover from a killing blow causing Geralt surround himself in a magical shield, and make enemies explode when they take a critical hit from a sign attack. They're the kind of powers you might consider bringing into new game + and building them further from there.

The Witcher 3's final expansion looks to be a substantial send off for the game as a whole. It gives you a new area the size of Novigrad to explore, a story that seems right on par with some of the game's best quests, and a place to gather and admire your accomplishments. Plus, it also hands you some ridiculously powerful mutations to mess with as you sweep up your remaining side quests or just start another adventure in NG+. More huge pieces of content may no longer be coming to the Witcher 3's vast open-world, but it doesn't look like we're going to be running out of witchering to do any time soon.