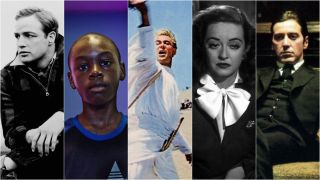 Every year, the best and brightest of Hollywood meet together at one star-studded event to celebrate their greatest achievements. We are, of course, talking about the Academy Awards, better known as the Oscars.

They are, as intended, a great barometer for sorting the good movies from the bad. But choosing the best Oscar-winning movies of all time is quite a challenge. There have been almost 100 ceremonies since the award's inception, and each one gives prizes to a couple of dozen movies.

So, how did we come up with this list? We only looked at those movies that won the prestigious Best Picture award and then chose our favourites from that list. So, without further ado, here are the 25 best Oscar-winning movies you should watch before you die.

Talk about bleak victories... Michael Cimino's Vietnam drama may not be an uplifting film, but that's partly why it struck a chord with the Academy. One of only a few films to directly address the effects of the war, it's a striking piece of cinema that cuts between the delight of American soldiers enlisting and the horrors they face once they're at war.

Is West Side Story the best musical of all time? Since its release, plenty of competitors have emerged, but there's something infectious about the sheer energy of the movie. A Romeo and Juliet story told in New York City's west side through the medium of song and dance – its as fun as you might expect.

Think Grease but with way smoother collar-poppin'. Plus, afterwards, you won't be able to stop clicking your fingers and telling people to just be cool. No wonder Steven Spielberg wanted to remake this classic.

You know how it goes. A cop on the verge of retirement is dragged into a life-changing case on his last day. Clint Eastwood's 1992 western, Unforgiven, takes that idea and yanks it through the dust and grime of Big Whisky, a small town that's witnessed some heinous activities.

At the top of his game, both in front and behind the camera, Eastwood gives one of his best performances as the grizzled – is he ever anything else? – William Munny, an outlaw who returns to finish one last job. It's still a surprise that such a dark, violent fable managed to bag the Oscar.

There are few movies as heart-wrenching as Moonlight, a movie split into three distinct acts, each one focussing on a different time period in the main character's life. With three different actors portraying Chiron/Black/Little, this could have been a tonal mess. But under Barry Jenkins' masterful touch, each one works in perfect tandem with the other.

The result is perhaps the most emotional Oscar winner of the 21st century. Watching Chiron come of age while struggling to comprehend his own sexuality is heartbreaking. Then there's his strained relationship with his mother, played beautifully by Naomie Harris. Have tissues on standby.

Still lingering over Milos Forman's film is the small matter of accuracy. What actually went down between Wolfgang Amadeus Mozart and his noted rivals? Was it really this soap opera-ish? It's not the first biopic to dally with the truth, and that shouldn't make a difference when the movie itself is this much of a majestic experience.

Before playing Hawkeye in the MCU, Jeremy Renner played William James in Kathryn Bigelow's Iraq drama, The Hurt Locker. As a war-savvy vet, Renner's Sergeant First Class heads up an explosive ordnance disposal team in Baghdad, eventually going off-mission to seek revenge for the murder of a young boy.

It's through his maverick and often dangerous methods that the movie opens up its larger theme; how conflict truly affects soldiers. Plus, it's the first Best Picture winner directed by a woman.

Based on the real-life story of a New Jersey whistleblower, this tale of corruption at the docks made Marlon Brando into a bona fide star. He also bagged his first Oscar as longshoreman Terry Malloy, a conflicted soul who stands up against the mob-controlled union despite his own shortcomings.

Sure, he's most fondly remembered for The Godfather, but this put him on the map. The movie also earned director Elia Kazan his second Oscar and introduced Eva Marie Saint to the world.

One of the Coen brothers' most ambitious efforts, No Country for Old Men plays like an updated western, ripe with dark, seedy undertones setting the scene for one hell of a mystery. Seeing as this is a Coen film, the story is told through the experiences of a regular joe who opts to completely ruin his life.

Josh Brolin plays Llewelyn Moss, the man in question, who discovers a bag of cash and decides, "I'll keep it! Why the hell not?" Javier Bardem's bolt gun-wielding psychopath Anton Chigurh answers that question for him, as one of cinema's most menacing and fearsome villains.

David Lean directs this excellent World War Two movie, reimagining the brutal enslavement of Allied prisoners forced to build the Burma railway. Alec Guinness' British Colonel encourages his soldiers to help the Japanese with the bridge as a way of boosting morale, while a fellow Brit pushes William Holden's American officer to destroy the bridge upon completion.

It exposes the truth behind Japanese Prisoner of War camps, and how thin the line between heroism and loyalty really is. Guinness is excellent as the Brit with the stiff upper lip, giving an all-time great performance.

Sylvester Stallone wrote his breakout role in Rocky. Like his on-screen counterpart, he too rose like the Philadelphian underdog who dreams of boxing in the heavyweight championship.

Rocky became the highest-grossing of the year, bagging $225 million, and turned Stallone into a global star. From his determination to succeed to his ambitious, post-montage air-punch at the top of the museum steps, you can't help but root for Rocky to bag that title.