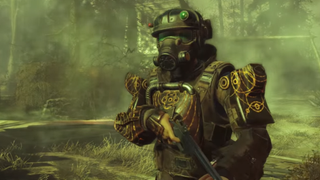 Far Harbor has a vast territory to explore, and in true Fallout 4 fashion, it doesn’t take long to get inundated with quests. You can blast through the main story if you want, but much of the game’s more unique moments come from the random side missions or the surprises uncovered during casual exploration. Here are seven things you’ll definitely want to make the time for as you uncover the island’s many mysteries.

1. Get the Captain’s Hat

For the cloistered town of Far Harbor, proving your worth to the locals goes a long way toward making the city more hospitable. Earn the respect of the harbor folk by performing the Captain’s Dance. The quest line for this stylish chapeau comes from Doc Teddy after you’ve done a couple of missions to help out the port residents. Once you’ve talked with him, take out a series of enemies (including a nasty Mirelurk Queen) and you’ll be rewarded with The Captain’s Hat. It gives you a movement speed perk, but more importantly, it will help you channel your inner swashbuckling pirate self while exploring the island.

The side quests are usually the most random but delightful part of Fallout games. As you stroll through Far Harbor, keep an ear out for a conversation between Captain Avery and the robot Pearl, who pleads for help solving a most ghastly murder at the posh hotel. The whole sequence is one of the most fun on the island, and definitely worth the break from the feud between the factions.

The size of the island was the big talking point of the Far Harbor DLC, but don’t forget to spend some time in the surrounding aquatic environments! Bethesda’s team has hidden some bizarre things below the waves. You can find shipwrecks, safes, mannequin coffins, and even gnomes guarding dead bodies. The island’s sense of mystery is one of its strongest components, and the weird underwater finds carry through that creepiness factor. If you haven’t already gotten the Aquagirl or Aquaboy perk unlocked for your character, it can make this adventure much simpler. It’s under the Endurance part of your S.P.E.C.I.A.L.

Speaking of hidden goodies, Far Harbor adds an impressive new armor set to the game. You don’t have to hunt aimlessly for it, though. It’s part of a quest that unlocks through the Better Left Forgotten mission, one of the central plot points. There are a few variations of the main set, such as the Assault or Recon versions, which offer different stat perks. Or, if you’re really lazy and really wealthy, you can also buy components of the Recon set from the vendors around the island. The numbers are impressive, just keep in mind that the complete set is very heavy.

Another great source of gear is the mysterious Shipbreaker. Keep an eye out for this radio signal on your Pip-Boy as you roam the island, and follow it to the source. If you survive the firefight, you’ll receive two new weapons. This is also one of the few times where it feels okay to give Nick a break and take Old Longfellow for a spin.

If you’re playing Far Harbor, you should be doing so with Nick Valentine as your companion. (Seriously, you’re doing it wrong otherwise.) But if you’ve left Dogmeat behind in the Commonwealth and are hankering for some canine companionship, fear not! There are three pups you can buy from a super mutant living in the crash site of Horizon Flight 1207. They aren’t full companions like Dogmeat, but they will roam around the settlement of your choice being adorable.

7. Talk to the Acadia synths

As you work through the main storyline, take some time to talk to the Acadia residents beyond the ones handing out quests. Most of them spend their time on the middle floor of the complex, and they’re generally open to chatting. Given the big role synths play in the game, the range of opinions expressed by those residents offers nuance that may push your faction allegiances in unexpected directions.