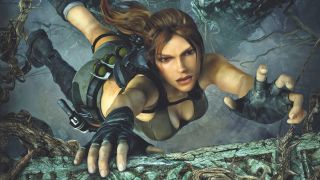 Here’s how to start an archaeology adventure properly – by chucking me into the sea. After a brief prologue, Crystal Dynamics’ excellent Tomb Raider: Underworld drops Lara in the Mediterranean and leaves you to figure out where to take her next. Instinctively, you swim downwards, gradually closing on a murky mass of rock. Jellyfish float past, sharks attack if you let them get close and the rocks twist out into dead ends, hidden treasures and a sealed tomb entrance. You want to get inside, but you’re going to have to earn it.

The tomb’s ancient door has two crucial cranks missing, but that isn’t highlighted. There’s no magical compass pointing towards the doors, no flashing indicator or mini-map. You have to find the cranks yourself. It won’t be the seabed’s toughest challenge, but it’s jarring to replay this after 2015’s Rise of the Tomb Raider. That game was so determined to hold my hand at all times, it felt as if it was coming on to me. 2008’s Underworld doesn’t care if you’re not good enough to get ahead.

Is swimming around the ocean looking for cranks my idea of a good time? Well, I’ll take my searching abilities over Rise’s cheaty Survival Instinct any day. With a click of the right stick, 2015’s game highlights points of interest and interactive objects, spelling out what you need to do next. If Underworld were to highlight the crank, there’d be no challenge in finding it, and getting the door open would be pure busywork. Because I have to really search for it – avoiding attacks on the way – then heave it back to the door and figure out how to use it, I get a nice hit of satisfaction when the entrance finally clicks open. Everything feels earned.

My favourite Underworld tomb is in coastal Thailand, hidden deep in the jungle of a tropical island, among the acid-spitting lizard things (I’m guessing the development budget didn’t stretch to an accuracy research trip). After swimming to the island, searching for a route through the rainforest, then climbing, leaping and shimmying to higher ground and shooting hundreds of those damn bats, I’m treated to the sight of a giant stone structure carved with staring faces. It’s a feast for the eyes, which is lucky, because I’m about to spend another hour wandering around outside it. The constructors of said tomb put far too much effort into its death traps and secrets to let just any idiot stroll in and track mud on the carpet. You’ll have to explore the outskirts and solve puzzles to break the seal while getting regular, tantalising glimpses of the ruin you’re struggling to get inside.

This is an adventure that prioritises the journey over destination. Crystal Dynamics had proven their Croft cred with Legend and a remake of the first game, but Underworld, with its wide, open-ended locations, was their first title to really take advantage of the Xbox 360’s power. You enter a metaphorical tomb the moment your toes hit the seawater, as the outside areas have all the clever puzzles, rubbish combat and ace platforming you’d expect inside a traditional Raider catacomb, with the added benefit of a nicer view. But instead of using some meaningless plot McGuffin to drag Lara through the story, you are driven forwards by a desire to see inside the glorious dungeons. Underworld’s tombs have inspired environmental puzzles worth breaking in for, but wouldn’t feel like such events if their creators hadn’t locked you outside.

There’s an art to the door-opening puzzles, and Underworld’s greatest hits rival Zelda for ingenuity, refusing to spell anything out for you. You can see the giant squid blocking the exit, a spiky platform high above and several chains and footholds around the chamber and walls, but it’s up to you to figure out how those pieces fit together. There’s an option in the menu that prompts Lara to give hints, but her thoughts are hilariously vague and unhelpful. “Something’s stopping the lift from working,” she offers when I can’t figure out how to get the damn lift working. Brilliant. Thanks for that.

No, sincerely: thank you. This game understands that I bought something called Tomb Raider because I wanted to feel like a genius archaeologist. While I’m stuck outside, trying to get its bloody tombs open, my sense of anticipation keeps building. If it’s this determined to keep me out, what’s hiding inside must be incredible.

I want to feel like I’m the first person to see that tomb’s interior in thousands of years. That’s why I’ve never cared for Dark Souls’ messaging system, whereby players can leave notes on the floor. The illusion of being a brilliant explorer unearthing a mystery is broken when I see I’m actually just another in a long line of tourists to saunter through. Rise of the Tomb Raider often makes me feel that way too – there’s no magic in breaking into a tomb that doesn’t put up a decent fight to keep you out. That game won’t let you wander around lost for long. Heaven forbid you should derail its beloved pacing.

And that’s a shame, because the only way to capture Underworld’s unique magic is to block Lara from progressing along the way. Getting stuck is infuriating, and getting lost more so, but it’s all worth it when your brain’s gears finally whir in sync. You figure out the series of jumps needed to reach the mechanism, yank the stick out of the cogs – and oh, that’s how you get the lift working! Rise is great (and better with Survival Instinct turned off) but for a pure exploring experience, I’ll take Underworld’s great outdoors/indoors every time.