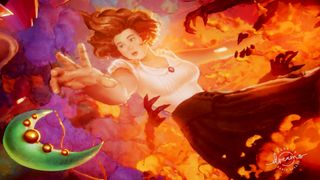 You don’t know it yet, and neither do they, but one day someone will stand on an E3 stage to present a game that you can’t wait to play, and they’ll be there because of Media Molecule's Dreams. People will get development jobs from it, and games made in the Sony’s upcoming creative tool will jump to full release in the same way a breakout PC mod can.

And, if you think that’s an exaggeration, then you haven’t met any of the Media Molecule designers hired from the community of its previous game, Little Big Planet – people who have gone on to found their own development studios and work at places like Riot on League of Legends. “I know lots of people who have gone off to work with different companies [and] their CV was showing stuff they made in Little Big Planet,” Media Molecule co-founder and creative director Mark Healey tells me not long after showing me where the tea cups are in Media Molecule’s kitchen (in the cupboard covered in pictures of team pets).

Where Dreams differs crucially from Sackboy’s previous creative efforts is that it’s left the hessian flourishes and felt block stamping behind. Where before you were limited to a very LBP flavoured palette of materials and tools, now you can make anything look like anything. It’s something ably demonstrated by the recent beta’s raft of things like first-person shooters and jump scare horror games, through to platformers, puzzle games and interactive artworks. The simple pistons and block building of LBP has given way to a fully featured software development kit. Something capable of creating things that, if you weren’t loading up them in Dreams, wouldn’t give away any clue of their origins.

“I think that’s one of the things that really surprised me,” says Healey. “There’s a particular creator called Disarmed and they were making very… I don’t know if ‘realistic’ is the word but they was just doing something that I hadn’t seen before: grand vistas and... ‘Woah that looks like a completely different game!’ I think a lot of people might have seen that and are like ‘OK, that completely changed my mind about what Dreams is, or what it can be.’”

So, to be clear, if you’re not sure what Dreams is – and I hear a lot of people say something like ‘I know you can make stuff but what is it?’ – then just try to understand that it is a game engine. That’s it. The same as Unity, Unreal, Frostbite, Source, and so on. A game engine. On a console. One that gives you everything you need to create and release a game using its built in tools and social platform. Sculpting, animation, music, level creation, publishing etc – in terms of accessibility for aspiring developers it’s, pun fully intended, a game changer. With a PS4, a controller, and an idea: You. Can. Create. A. Game.

Key to this is making it all accessible. You don’t have to make an entire playable opus, although that’s arguably the… um, endgame of Dreams. You could doodle, paint; you could enjoy making silly wobbly animals, or work out a few loops and beats. Or you could simply play all the other things people make. “I think the first hook, the first catch on the lip will be [people] just playing stuff other people have made,” explains Healy in a corner of Media Molecule's kitchen. “I don’t want to blow our own trumpet or anything – but it is addictive just playing it. I’d go home at night and I’d just have a quick little look before I’d go to bed, and you’re, like, four hours later, ‘Fucking hell, I’ve got work tomorrow!’”

That ability to get lost in what people have made is what the studio believes will act as a gateway to actual creation. “[You’re] realising what you’re playing was made with these tools [on] the screen,” Healy points out. “They’re only a click away. So hopefully that will tempt people into at least dabbling. I imagine people will at least – if someone’s never contemplated creating stuff – be tempted to go into something that’s remixable and just pull it apart and have a look.”

The ability to ‘remix’ means you have the ability to download any remixable game (from the community or Media Molecule), that you’ve enjoyed playing, as an editable project, and access all the inner workings to fiddle and mess with as you please. Effectively, you can take apart someone else's game and use it to ‘make’ your own by playing with the creative side of of it. It’s a good place to start, especially according to technical director and another co-founder David Smith. "I’ve always felt if you want to make a game the best way of doing it is if you start with a game. We can all look at a game and say ‘yeah, that’ll be better if the jump was higher…’ and ‘if we got rid of that block there and if we just move some things around…’ So, if you’ve played a level in Dreams, you’ve just finished it, given it a thumbs up and then hit the Remix button; you’re straight in there, with all the creative tool sets.” (It’s worth noting that Dreams has a built in genealogy feature that tracks the ‘life’ of a creation, keeping the original and its remixes separately and individually credited).

While the ultimate ‘use’ of everything that Dreams offers might be to create a game, almost every element of what it offers stands alone in its own right. The sculpting tool especially is an incredibly powerful and simple to use piece of creative kit (especially with two Move controllers). This is me on the second night of the beta:

Slowly getting to grips with Dreams. First sculpt where I more or less felt like I knew what I was doing. #DreamsPS4 pic.twitter.com/qGUuH4LArWFebruary 2, 2019

Normally you’d need a specialist program, a good PC and an exceptional tolerance to drop down menus to do anything like that. Similarly, the music, animation, and painting tools stand alone in their own right.

As Mark Healy mentioned before, the ‘hook’ might be playing other people’s creations initially, but it’s not hard to see how it could entice people to try something themselves. Maybe just to see how something was done, then later try something themselves – from prop design to character creation and animation, to short films and more. “When Dreams comes out, there’ll be people that never thought they were creative,” Alex Evans tells me, another Media Molecule co-founder and ‘Technically a Director’ according to his choice of job title. “They may not be interested in the create tools initially, they may be like ‘Oh I’m just going to enjoy some games, I’m going to play some cool shit.’ And then three hours later, they’re like ‘I’m going to make this fence and it’s going to be so cool!’ Then a week later they see see it somewhere on YouTube and be like ‘Holy shit, my fence has made it!’”

There were people in the Dreams beta that just made props, some painted, others rigged and animated entire characters, or designed complex AI logic for the community to use. Lots simply took all this and used it to create something entirely new just using these things other people had made and shared. It’s as easy, or as hard, as you want to make it. And to make game creation even easier the Alpha, releasing in Spring 2019, will be adding Templates. These, according to Healey, are “a starting point for a certain genre of games. So we’ve got a first-person shooter template, for example. It’s just like a very simple white boxed version of a shooter. So you take that and you can instantly start putting your own art in and you don’t have to worry about ‘how do I make a first person shooter?’ We’ve done it for a first person shooter, there’s a 2D side scrolling platformer, there’s a whole bunch of really obvious genres, driving a car, different things [like that].”

The ability to create, remix and share  together so easily has already created a passionate and friendly community in the beta. “We took a dump of every single comment and searched for rude words, for ‘f-u-c-k’, and we were looking for bad behaviour,” Evans explains, “and what we found instead were people expressing joy. They were all ‘fucking hell, this is amazing!’ ‘Fuck yeah!’ And I was like, ‘Wow, what a community and what a culture to come into!’”

“Other than the content that was made, it was more about the relationships that started forming,” Healey continues. “You could see people who had published something, and within a week they’d formed a team, they’ve got all their concepts for their big epic game that they’re going to make together and they made a trailer. What really blew me away is how quickly that’s happened and – cor – people are really embracing this thing and taking it really seriously. It’s just… everything about the beta was amazing, really.  Obviously, we hoped it would do a certain thing, but it’s just gone beyond what we expected by everyone’s means.”

All this excitement – both on the side of Media Molecule and the sweary fans – has happened in the few weeks the beta was running. The success of that has, in turn, led to the spring Early Access release which the studio believes will kickstart years of content and creations from the community. “Originally we’d hoped to include our story mode and various other elements, which are coming, but we had this moment [after the beta] where we were like ‘do we hold this awesomeness back, or do we put it out because the parts we’ve built - the tools, the tutorials - are done?’” Evans says, concluding, “the beta gave us the confidence to say ‘this is more than good enough, this is wonderful’. Obviously we’re evolving it, we’re adding the Story Mode, adding future elements [but the early access] is Dreams 1.0, this is a big deal.”