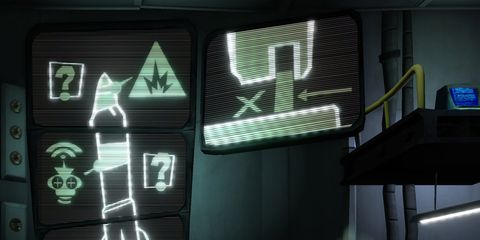 Seven adventurers seek answers to their life’s questions inside of a mysterious talking cave in Double Fine’s The Cave, an adventure game from the mind of Ron Gilbert (Maniac Mansion, The Secret of Monkey Island). The dark delve speeds up the standard point-and-click adventure and mixes in fast-paced platforming, leading to challenging puzzles and hilarious moments for a remarkably replayable adventure game that you won’t want to miss.

The story of The Cave completely depends on the who you select for your three-person party. You'll choose from a roster of characters like a love-struck Hillbilly, a pair of creepy Twins, a medieval Knight, and a futuristic Time Traveler, each one offering a unique and entertaining story as you progress through the titular cave. You'll slowly uncover your party member's individual stories as you progress through the game's puzzles.

The characters all have a unique ability, enabling them to solve special puzzles to gain access to their own themed locations. The Hillbilly, for instance, can hold his breath indefinitely, allowing you to reach a carnival-themed level--one that’s specific to him, and continues his personal story. This adds considerable incentive to replay the game after it’s completed, as you’ll need to go through it a few times to see all of the locations and to discover the whole story.

Uncovering each of the characters' stories is extremely entertaining. Not only will you get to play out your characters' individual narrative in their themed levels, but you can also seek out collectible symbols throughout the game. Each symbol provides a small snippet of a character's story, and collecting them all will give you the full background of what led them to the Cave (which is as dark as it is hilarious, and keeping with Double Fine's signature humor).

All of the characters' respective levels are unique to their story. The Time Traveler's level is particularly creative, forcing you to travel between three time periods to an encounter her egotistical, future coworker's ancestor. You'll have to manipulate objects in the past to affect them in the future. Combining the actions of your three characters within three time periods is a difficult, but ultimately rewarding situation to juggle, and all of the other character's levels are just as impressive.

As far as the gameplay goes, the puzzles are both challenging and incredibly inventive. Most situations call for you to find an item that will help you get past a barrier, but the solution isn't always obvious. In The Cave, light platforming moves you around the levels. You'll explore the Metroidvania-like environments in search of keys, objects, and other means to solving the game's complicated puzzles. The platforming controls feel imprecise and, at times, a bit clunky, but there are never any moments that require you to be incredibly accurate to progress. You might just get a little frustrated after failing several attempts to jump into small objects.

There were a few instances in which you'll occasionally run into occurrences of the frame-rate dropping when you are transitioning to new locations, but it's never troublesome enough to really affect the gameplay. Also, when playing alone, you'll have to travel through locations multiple times because you have to take control of all three characters separately. This significantly slows down the game in some areas leaving you wishing there was quick command button could call your other characters to your location.

Having one or two other co-op buddies in the game's local co-op is the best way to play the game, if only to share in the game's outrageously twisted humor. The screen never splits, so occasionally extra players may have to sit out of the action for a few moments while your group switches between tasks, but the nature of figuring out the puzzles keeps the game entertaining whether you are actively playing or not.

The Cave is an extremely entertaining, surprising, and inventive adventure all the way through. The characters' surprising stories make you want to uncover the dark history of each one, and the challenging puzzles are rewarding to conquer. Ron Gilbert and the team at Double Fine have created a truly memorable adventure title that will keep you engaged until all of the fascinating characters' stories have been told.